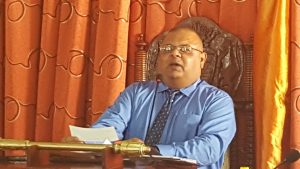 Georgetown’s City Council waived GY$19 million in interest rates to rake in much needed GY$7 million in rates and taxes, the same day that municipal workers picketed City Hall to vent their frustration at repeated late payment of salaries.

Deputy Mayor, Lionel Jaikarran announced that he collected the GY$7,511,130 cheque from the lawyer for an unidentified business, hoping that funds would be used to pay workers. “It is my sincere hope, Madame Town Clerk, when I hand you this cheque, the first order of business would be to see that the staff remunerated for their services,” he said, adding that the matter was discussed with the Town Clerk.

“I persuaded a delinquent rate payer to pay,” said Jaikarran who performed the mayoral duties in the absence of the substantive Mayor, Patricia Chase-Green.

Councillor Junior Garrett of the Finance Committee, in noting that GY$19 million in interest was waived as part of the deal, hoped that other councillors would take the initiative similar to the Deputy Mayor’s to assist in bringing in outstanding  revenue. “In this transaction, we have bent backward and waived interest just to get this transaction…We need the money. Payments have been delayed all the time because of our financial situation and I want to implore on councillors to please emulate what the Deputy Mayor has done and I hope that tomorrow he brings in some more because we still have November salaries and December salaries,” he said.

Still unpaid for October 2017, many of the workers staged a midday picket to register their concern about the financial state of City Hall. An extraordinary council meeting is scheduled for Tuesday afternoon to discuss the cash shortage, a just concluded trip to China by Mayor Chase- Green, Town Clerk Royston King and Chairman of the Finance Committee, Oscar Clarke.

The Deputy Mayor  said municipal workers have been complaining to him that they have been borrowing monies to meet personal expenses and would have to repay with interest. “It is hard when you live pay cheque-to-pay cheque. Those who know it, feel it. My empathy goes out to each and every member of the staff. I saw them in front of City Hall and my heart broke for them,” he said.

Meanwhile, Councillor Heston Bostwick complained that he received a cheque from the City administration that he could not have cashed earlier Monday and he threatened to quit his seat in the local government body. “I am not a person that likes to go to the press but if it is that the Administration cannot respect councillors- elected officials- and treat them with that respect, I humbly, sincerely promise that if this does continue I will have no other choice but to tender my resignation,” he said. Bostwick is owed GY$150,000 as a stipend for his participation in the parking meter negotiating committee.

Jaikarran asked the Town Clerk to ensure that Bostwick is paid after the staff members are paid for October,2017.