Guyana, Brazil to remark border; recommit to respect for territorial integrity and sovereignty 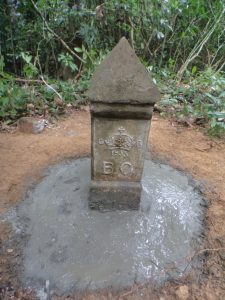 A marker at the border between Guyana and Brazil

“The team will look at the marks, repair and update them for posterity. The integrity of one’s country is paramount and to ensure that our integrity is assured, one of the things that we do is to identify the borders to make sure that it cannot be encroached or is not encroached by others and since we have a really good relationship with Brazil it is easier for us to keep that border clean, clear and visible to all concerned,” Commissioner of the Guyana Lands and Surveys Commission, Trevor Benn said.

Due to the density of the forests in the border region, only four marks; BG15 to BG19 will be re-marked and redone during the four-day exercise. The remainder will be done at a later stage.

At the completion of the re-marking process, a follow up meeting will be held between the two delegations to discuss the successes and challenges for future planning.

The process was started in 1994 but was stalled for years due to funding issues on both sides. 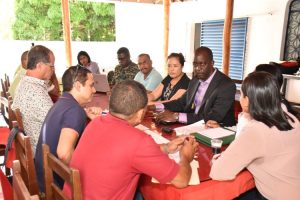 Members of the two delegations in discussion at the preparatory meeting held in Roraima, Brazil on Saturday, November 12, 2017.

The decision to engage in the exercise was made by a preparatory meeting that was held in Roraima State, Brazil

Guyana and Brazil decided to remark and re-do the border markers at a time when the United Nations is likely to send a decades-long border controversy between Guyana and Venezuela to the International Court of Justice (ICJ).