Government wants the High Court to dismiss a case by the opposition People’s Progressive Party (PPP) aimed at quashing the appointment of Retired Justice James Patterson as Chairman of the Guyana Elections Commission (GECOM).

Among the grounds cited by Solicitor General, Kim Kyte is that President David Granger was not obliged to accept one of Opposition Leader, Bharrat Jagdeo’s 18 nominees and the Guyanese leader’s actions could not be challenged legally.

“I will further contend that this entire application is absurd, misconceived and void of legal reasoning and merit and ought to be dismissed with substantial costs since His Excellency the President cannot be directed to choose a person from the lists of eighteen which he specifically rejected,” Solicitor General, Kim Kyte said in response to legal papers filed by Attorney-at-Law, Anil Nandlall on behalf of the PPP’s Executive Secretary, Zukfikar Mustapha. 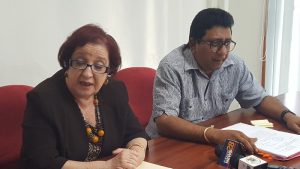 Meanwhile, former People’s National Congress Reform (PNCR) General Secretary and ex parliamentarian, Aubrey Norton has said that it was the PPP that had amended the constitution to place a clause in the constitution that states that “provided if the Leader of the Opposition fails to submit a list, as provided for, the President shall appoint a person who holds or has held office as a judge of a court…” However, PPP Executive Member and former Governance Adviser, Gail Teixeira said it was the Constitutional Reform Commission that had recommended that inclusion and it had been unanimously approved by the government and opposition parliamentarians in the National Assembly at the time.

She could not recall whether it was the PPP that had proposed the change.

Nandlall told Demerara Waves Online News that the amendment was intended to capture the need for consensus as had been envisaged in the Carter Centre formula and also give the President the constitutional right to appoint a GECOM Chairman if the Opposition Leader fails to submit a list. “It is not what Mr. Norton articulated. That proviso was put there in the event there is no list. It was to fill the vacuum so that you cannot have a crisis situation if you have a delinquent Leader of the Opposition or a Leader of the Opposition chooses not to submit a list,” he said. Nandlall stressed that once a list has been presented to the President he has an obligation to pick someone as part of a joint process.

The Solicitor General, in her court papers, intends to argue that under the Constitutional provision governing the appointment of a GECOM Chairman, the President “is not required to consult, consider and account to the Leader of the Opposition in the exercise of his own independent and deliberate judgment.”

The State wants the High Court to award “substantial cost” to the Attorney General if the case is dismissed. She added that the constitution does not require the President to state reasons for deeming each of the six names on the list or the entire list to be unacceptable because he had already furnished the Opposition Leader with the criteria to qualify for GECOM Chair.

Kyte said she would argue that the judicial arm would encroach on the principles of the separation of powers, spirit and intention of the constitution and affront to the rule of law if it entertains and grants such an application.

The Solicitor General said the President acted constitutionally, of necessity to uphold the rule of law, to prevent the creation of a legal vacuum with grave consequential chaos and in the interest of good governance.

On the thorny issue of Justice Patterson’s political loyalty, the Solicitor General rubbished the PPP’s grounds of bias on the basis that he is a member of a Facebook Group named “Rally Around the People’s National Congress” and that he was among a select group of pallbearers for then party leader Desmond Hoyte. ‘I further contend that it is vulgar, distasteful and an abhorrence to invoke the dead on a person who was merely paying tribute to a colleague at the Bar,” Kyte said. In relation to the Facebook Group, she said that social medium account had nothing to do with the PNCR as that political party’s Facebook  pages are not public, and have their own administrator and party logo

She deemed several aspects of the PPP’s affidavit “irrelevant, speculative, malicious, frivolous and vexatious”. On the issue of President David Granger stating that none of the nominees should be a religious leader or activist, the Solicitor General said she intends to tell the Constitutional Court that Patterson’s theological training, learning and/or pastoring a church are insufficient grounds to deem him or any person a religious activist. “I am further advised and do verily believe that the Honourable Justice Patterson is no longer a serving Pastor and has not served as a Pastor since 2005”.

Kyte labelled as “duplicitous” the PPP’s contention that Patterson was a pastor while at the same time the Opposition Leader had on his third list nominated Mr. Onesi La Fleur who is currently a serving Pastor.

On the issue of Justice Patterson being an adviser to the Attorney General and Minister of Legal Affairs, the State said such a ground was “deceitful”. “It is therefore deceitful for the applicant to aver to the advisory capacity of Justice Patterson, even as the Leader of the Opposition in his first list nominated Mr Christopher Ram who also served as an adviser to the Honourable Attorney General on the establishment of the Joseph Haynes Law School.’

While Justice Patterson is a member of the ministerial Council of Legal Advisers comprising of five legal luminaries appointed by the APNU+AFC Cabinet comprising of six political parties in a coalition government, the State Solicitor rejected the PPP’s claim that he was being paid GYD$800,000 as an “outright falsehood and is rejected fully”. She said Cabinet approved a monthly honorarium of GYD$20,000 for the chairperson and GYD$15,000 for each member

Patterson’s services, she said, were available to all government ministers and not the Attorney General alone whereas the services of Mr Ram as an adviser ti the Attorney General and Minister of Legal Affairs were voluntary and specific to him,  “I further contend that since the Leader of the Opposition placed Mr Christopher Ram in his first list both of them believed that Mr Ram was not unfit because he was an adviser to the Attorney General and Minister of Legal Affairs and as such it is hypocritical for the applicant to claim that Honourable Justice Patterson is disqualified for being such an adviser,” she said. Kyte added that the the Leader of the Opposition similarly felt that Major General Joe Singh was fit and proper to be placed on his third list despite being a paid advisor to the president

With regards to the PPP’s claim that the GECOM Chairman might have misled the public by stating on his curricuum vitae that he was Chief Justice of Grenada although he had merely acted for a short period, the Chief Justice said “Chief Justice” and “Chief Justice acting” are used interchangeably within the region and even more particularly it is so used in Guyana. “I am informed by the Honourable Justice Patterson and do verily believe that the fact that the word “acting” did not appear after the words “Chief Justice” was not an intention to deceive and further that does not negative the fact that he held and executed the functions of that office

The Solicitor General intends to rely on a bundle of editions of the Grenada Newsletter and Barbados Advocate in which Justice Patterson is referred to as acting Chief Justice and Chief Justice.