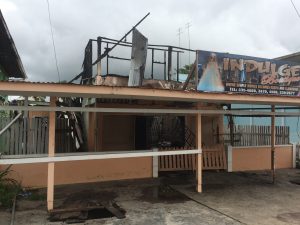 The remains of the Indulge Boutique’s main store.

A Corentyne businessman is suffering an estimated GYD$52 million in losses after an early Tuesday morning fire gutted his main boutique named ‘Indulge’ located at No. 78 village, Corentyne in eastern Guyana.

46-year-old Raj Ramdass of Lot 3 Yard, Springlands, Corentyne, in an interview with Demerara Waves Online News,  stated that he received a call at about 4:30 AM from a neighbor who informed him that his place of business was on fire.

The man stated that he quickly rushed to the scene and met his entire building  engulfed in flames.

“Them neighbors call me and tell me seh the place den on fire and when I go deh, the whole place catch fire and we nah get to save nothing”.

According to the businessman, half an hour later, fire tenders showed up at the scene and were forced to break a 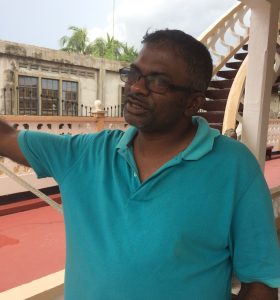 main pipe line to get access to water. Unfortunately, the building was already destroyed. Ramdass, who operated the business for the past ten years, stated that he was informed by fire fighters that they suspect that the fire was of an electrical nature.

“They said that is current cause de fire cause some estate man bin walking and they see the wire spark and it run straight to way the main box deh and fry all the switch”.

Nothing was salvaged from the blaze. The man operates a string of boutiques throughout the Skeldon area.