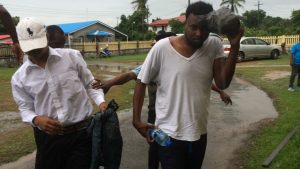 Three men were Tuesday denied bail after being charged with two armed robberies in the Glasgow, East Bank Berbice area.

The men, 18-year-old Peter Baker, 22-year-old Leroy Guevara and 28-year-old Aubrey Grant were not required to plea to the indictable charges read to them by Magistrate Alex Moore at the New Amsterdam Magistrate Court.

While entering the court, Aubrey Grant shouted that he was innocent of any wrong doing stating that he doesn’t know about any robbery or doesn’t know where Glasgow is.

The first charge read that the men on Sunday 22nd October, 2017 at Glasgow Housing Scheme, East Bank Berbice, in the company of others and armed with guns, robbed Pulwantie Singh of a J2 Samsung cell phone, one gold finger ring and one pair of gold earrings totaling GYD$77,000. 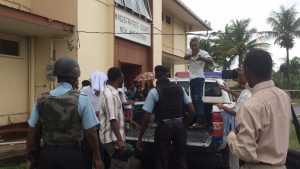 The men on the same nigh, in the company of others and armed with guns, are also accused of robbing Roopchand Parmanand of GYD$30,000.

Prosecutor, Inspector Godfrey Playter of the Guyana Police Force objected to bail because of the nature of the crime and the fact several other charges will be brought against the men.

Magistrate Moore denied bail and the men were remanded to prison until December 6th, 2017.