Police killings must be thoroughly investigated; Lusignan Prison should be shut down immediately-UN Working Group on African descendants

The United Nations Working Group on People of African Descent (WGPAD) Friday recommended that extra-judicial killings by police be thoroughly investigated and perpetrators brought to justice, but no mention was made of the gunning down of several persons by death squads.

“The government should take the necessary measures to guarantee that prompt and impartial inquiries are conducted into all extra-judicial killings by the police, including those targeting people of African descent, perpetrators are prosecuted and effective remedies are provided to victims,” states the WGPAD. 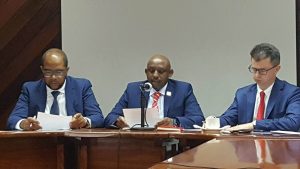 The Working Group made up several other recommendations at the the end of their visit from October 2 to 6, 2017.

Despite repeated concerns by the then opposition that has been in power since 2015 that the then People’s Progressive Party Civic (PPPC)-led government had either masterminded or tolerated death squads between 2002 and 2009 to combat heavily armed gangs, the Working Group did not refer to those deaths. The then opposition and allied interest groups had estimated that 400 mainly Afro-Guyanese persons had been gunned down by death squads.

After visiting Linden, Buxton, Georgetown and the Lusignan Prison, the WPAG also recommended that urgent steps be taken to end the political logjam in the appointment of an Ethnic Relations Commission and the Human Rights Commission which are provided for in the 2003 amendment of Guyana’s Constitution.

On the condition of the Lusignan Prison, the team said they found that penal institution violated the United Nations Minimum Standards for the treatment of prisoners and so that jail should be shut down almost immediately. “Prisons, which are not fit for human habitation, such as Lusignan Prison, must be closed down without any delay and be replaced with facilities that meet international standards,” the group said.

At the Lusignan Prison, the group said the majority of the inmates were Afro-Guyanese who have to endure inhumane conditions. “The facility is located close to a landfill with foul odour coming from the stagnant dirty water. The unhygienic conditions of the prison and associated health risks are of serious concern.”

The WPAG called on Guyana to ensure that all prisons are operated in keeping with international human rights obligations including the minimum standards for the treatment of prisoners. Overcrowding of prisons and detention centres, the group said, must be addressed urgently and the infrastructure and hygienic conditions are improved in keeping with international standards.

With regard to juvenile detention centres, the Working Group on People of African Descent cited the need for juvenile centres to adhere to international human rights standards and implement programmes for the rehabilitation of children. “There should be independent monitoring and inspection of of all facilities in which children and youth are placed to ensure that standards of treatment and care are maintained,” they said.

The UN Working Group on People of African Descent is expected to report to the UN Human Rights Committee by next year September. By that time, the Human Rights Universal Periodic Review would hear presentations on steps by countries like Guyana about its human rights record.