City Hall bans vending outside Demico; will remove vendors who refuse to leave 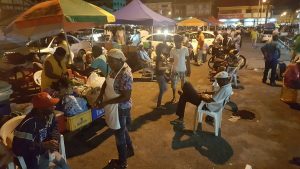 Food vendors outside the western side of Demico House, Stabroek Market Square, Georgetown.

Vendors selling on the western side of Demico House, Stabroek Market Squarer were Friday night enraged by plans to ban them from selling there from next week Tuesday, but Deputy Mayor, Lionel Jaikarran said he was unaware of any decision.

In a handbill purportedly issued by City Hall to vendors there and bearing the name of Town Clerk, Royston King, they were told that “The Mayor and City Council will remove any and all persons selling on the western side of Demico any time after October 10, 2017.”

However, the Deputy Mayor, who is also the Chairman of the Council’s Markets Committee, said he was unaware of any decision to remove the vendors from the western side of Demico. “I am not aware of that at all. Not that I know of at all, Sir, and I am also the Chairman of the Markets Committee and I should be the first to be alerted of this. I don’t know anything of this,” when asked whether the Council had decided to remove the vendors. Jaikarran planned to make enquire about the decision on Saturday. 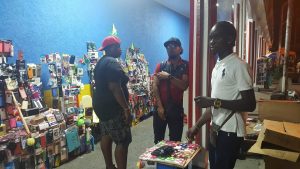 The phone accessory vendors on the pavement on the western side of Demico.

Angered by the move that they said would put them out of much needed cash to maintain their families and grow their businesses, the vendors noted that the City Hall handbills are dated October 6, 2017 but City Hall issued receipts to those vendors for selling outside Demico from October 2 to 7, 2017.

“I am a young person and I have a young family- a two year old and a four-year old and my mother sick-It will be hard. I borrow people money to turn over,” said vendor, 27-year old Samuel Tudor who has been vending there for the past four years.

One of the vendors, who sells cellphone cases, charges and power-packs on the pavement outside the western wall of Demico, said he and other vendors were granted permission to occupy that area on the condition that they kept the place clean and tidy. He said he paid his weekly vending fee on Thursday but was never told that he would have to remove.

Tudor’s concerns were echoed by a mother of three, Shelly-Ann Hope, who said no meeting was held with vendors. “They haven’t held any meeting. They are just treating us like dogs. They don’t have no where to put we. We can’t sell anywhere else because it is charger and earpiece,” she said. Tudor and Hope said they would like permission to cover the gutter and sell over it. “When I move Tuesday how I will survive? I don’t know any other trade, only selling,” she added.

The Town Clerk’s communication that “vending is not allowed” on the western side of Demico and that they must “stop selling” there from October 10, 2017 is also expected to affect food vendors who ply their trade on the area that is used by taxis during the day.

“It is very stressful when I saw that circular,” said a female vendor who sells  food thrice weekly to support her children’s attendance of University of Guyana and Government Technical Institute, purchase food and pay utility bills. “If I remove, it will affect my son’s education. It is just hurting my head so I want to know what can be done about it because a lot of single parents are selling out here… I don’t want to see my children on the market like me. That’s the reason why I am educating them from nursery to university. What I didn’t have, I am trying to give them,” she added.

Speaking on condition of anonymity, the woman said she was too old to be a prostitute although she never engaged on commercial sex work when she was young. “What you wan’t me to do? Pick fair (commercial sex work)? I am too old. I can’t pick fair. No man ain’t want me. I done old already and I never pick fair when I was young and I ain’t able pick fair now. That is the bottom line!,” she said as she awaited another customer.

The last time that Stabroek Market / Demico area vendors were dislocated was in May, 2016 ahead of Guyana’s 50th Independence anniversary celebrations. Many of the hat vendors, who had then sold on the western side of Demico, had bee forcibly removed and were given temporary refuge at a vacant plot of land on Hadfield and Lombard Streets.

Months later, the owner of the land, Hareshnarine “Chiney” Sugrim evicted the occupants of that land and locked the the gates.