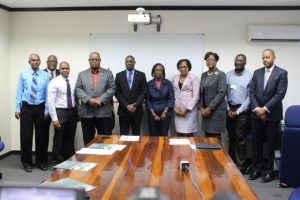 The Board Members of Power Producers and Distributors Inc with Minister of Public Infrastructrure, David Patterson (fourth from left).

The board of directors of state-owned Power Producers and Distributors Inc. (PPDI) was Tuesday installed with the promise of reducing overall operational costs and continuing to enhance  efficiency.

Public Infrastructure Minister, David Patterson said the coming into being of the PPDI would see the retention of the Guyanese team and a reduction in the “exorbitant” maintenance agreement that was proposed by Wartsila.

He said the exorbitant rates proposed by the multinational for the new operations and maintenance agreement, which ranged from US$15.54 to US$26.21 per MW made the decision easier – an estimated saving of of US$3.73 per MW. PPDI’s output is based on a consumption of 650,000 MW by Guyana Power and Light Inc.

“Without any doubt government is confident that PPDI can maintain the high standards set by its predecessor – delivering a cost efficient service and matching all key performance indicators (heat rate, availability and lube oil consumption),” he said.

The members of the company’s board are: Chairman, Mr. Mark Bender; Chief Executive Officer of PPDI, Mr. Arron Fraser; Secretary, Mr. Ronald Burch-Smith; Ms. Verlyn Klass; Mr. Stephen Fraser; Ms. Amanza Walton-Desir; Permanent Secretary of MPI, Mr. Geoffrey Vaughn; and Mr. Harryram Parmesar. The ninth member is currently uninstalled and this vacancy has been left for a member of the Parliamentary Opposition, who is yet to be appointed by the Opposition.

Other reasons highlighted by the minister for establishing the PPDI and scrapping its decades-old agreement with Wartsila, Patterson said, included the fact that the local subsidiary of the multinational was always manned by a 100% Guyanese workforce which continues to demonstrate increased competency in the management of the power plants.

He said over the last two years the most challenging of maintenance activities – major overhauls – were completed by an entirely local team thus eliminating the need for overseas service engineers. It is noteworthy, that major overhauls conducted by the entirely local engineers lasted 14-16 days while the last two major overhauls (one which is on-going) which were conducted by the Wartsila experts have both lasted in excess of 30 days. He said Wartsila was required to complete these overhauls because they fell in their contract period which ended 31st December , 2016.

He added that a “structured employees’ education program”,  which was developed by  Guyanese,  is “context- specific to the Guyana powers plants.  “This program has been a main contributory factor to the successes of past,” he said.

Asked why government did not decide to put the previous Wartsila-operated entity under Guyana Power and Light, the minister said government was merely following international best practice. “The way the model in the world is going is you have independent power producers…GPL has a unique mandate and I don’t want to further complicate the overall process and it’s part of the management strategy and the board as well,” he said.

Patterson said all of the 137 employees are being retained by PPDI.