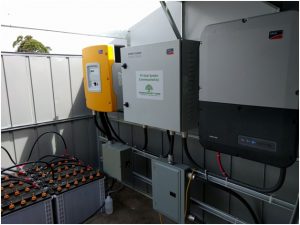 “The Paramakatoi project is the beginning of GHTE’s commitment to long term investment in the Guyana economy that will see the transfer of knowledge, investment of training and the utilization of local skills in job creation,” GHTE said.

For the Paramakatoi project GHTE employed local contractor Christopher Cheong to build the concrete foundation for the PV Solar Panel array. The company also flew in from Georgetown Aubrey Marks, an experienced solar system installer who worked alongside a Canadian based engineer from GHTE’s supplier, Franken Solar Americas to install the system.

GHTE said since the system was installed on March 3, 2017 the Pakaraima Flavors Sun Dried TomatoProcessing Plant has been running on a reliable source of green energy without a hitch. The system is equipped with a feature that allows the owners to monitor its energy load via the internet 24/7.

The company’s more immediate focus however is to provide affordable PV solar energy solutions for the residential and commercial markets in Guyana.

“We are looking to introduce to the market a PV solar system for the owners of homesand businesses that will reduce their dependence on GPL for power and lessen their electricity costs at the same time,” said Klass.

“With this approach we will help to eliminate blackouts as there will be a collective alternative source of electricity resulting in less demand for power from the utility,” he added.

Green Heart Tree Energy Inc. is a Guyanese company with international partners that has Guyanese at the forefront including Chief Executive Officer Esmonde “Gamo” Klass. It was formed following President Granger’s call for diaspora Guyanese to return, invest and contribute to the development of the nation during a visit to Toronto in September 2015. They said they have since registered companies in Canada and Guyana.

The company’s strategy is to forge relationships with multi-national companies that will result in investment here and jobs for Guyanese. We are also working to ensure these relationships result in the transfer of technological expertise, the opening up of more economic opportunities, strengthening of the manufacturing base and new capital inflows.

In the large infrastructure development sector the company plans to get involved in the construction of oil facilities, high span bridges, deep water ports and water treatment plants.

“Our strength lies in the international relationships we have established,” said Chief Executive Officer Esmonde ‘Gamo’ Klass. “We have a Polish-Canadian International businessman and a Shanghai based business owner, along with a Canadian engineer who also owns his own engineering firm who are also members of the GHTEE team. We see the opportunities to contribute to Guyana’s development and we are here for the long haul.”

GHTE said it has taken the initiative to design, engineer, procure, construct and deliver a non-grid connected solar PV micro-grid system for the Paramakatoi Flavours Sun-Dried Tomato Plant. The company said the system is designed taking into consideration the actual climatic data and historical weather patterns of the area.

The company added that. “Our engineers ran multiple simulations to determine the correct system size based on battery storage capacity, solar PV capacity and the predicted electrical loads requested in the Request For Proposal (RFP) by the Institute of Applied Science and Technology (IAST).”

The Paramakatoi Flavours system includes 3 solar PV racks or arrays complete with top grade Hanwha Q-Cell Modules and American made, German Engineered Schletter Racks. Adjacent to the solar PV arrays is a small building, shipped from Canada, designed to house the batteries and electronics. The lead-acid batteries are on a pre-assembled custom built battery skid. Each battery comes complete with a visual monitoring float for each cell within every battery. GHTE has included in the shipment additional battery water to ensure the system is maintained using the correct materials and fluids.

The battery inverter, solar PV inverter and a Smart-Transformer will be mounted inside the building on a custom build galvanized steel frame.

GHTE says it has engineered a system that is on the leading edge of technology for microgrid systems. This is an AC coupled system unlike a typical DC coupled one.  Even though they usually include an inverter, most battery-based PV systems are “DC-coupled” meaning the PV array sends DC electricity to the system through a charge controller to the battery bank. That DC power is then drawn from the batteries for the loads, including through a battery-based inverter for AC loads.

The company said AC coupled PV systems are gaining wider support through several battery-based inverter manufacturers. In AC coupled systems, the DC power from the array is first converted to AC by a battery-less inverter, to be used by the AC loads through an AC load panel. Any unused energy is consumed by a separate battery-based inverter that either converts the AC to DC to charge the batteries, or, if it is a grid-tied system, it can also pass through to additional AC loads and/or the grid.

GHTE added that it pre-assembled the entire battery system on a custom built skid and electronic components on a custom steel frame to test and confirm operation prior to shipping. Testing in Canada ensures that when the system arrives in Guyana the ‘bugs’ have been worked out and reduces the installation time on site.

“Once the system installation is complete our engineer completes a final quality control check to ensure that all check points of the system construction have been completed to our high quality standards. GHTE has provided technical manuals for all components used along with a technical users guide that outlines necessary maintenance check-points, schedules and defined user necessary operating details.”

GHTE said it is providing a top quality system with tier 1 components. The system was engineered and built in Canada and is being introduced for the first time to the Guyana market.