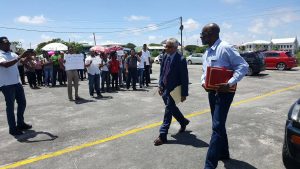 Chancellor of the University of Guyana, Professor Nigel Harris and government representative on UG’s Council pass a group of students who protested the planned increase in tuition fees.

Even as the University of Guyana’s (UG) Council was meeting Thursday afternoon to discuss proposals to increase tuition fees and salaries, students lamented the quality of the teaching-learning environment.

Vice Chancellor Professor Ivelaw Griffith said the hike is necessary and he assured that steps are being taken to boost enrolment from other countries like Grenada, Antigua and Barbuda and St. Lucia to ensure that UG’s coffers can consistently bear increased salaries. “…which is why we are not relying only on local recruitment….we are building a pipeline to increase our enrolment. We can’t any longer rely only upon local. This is a global connectivity. This university is to reach out and touch,” he told Demerara Waves Online News. Already, students from several Caribbean countries including Belize, and Trinidad and Tobago pursue studies at UG.

The University of Guyana Senior Staff Association (UGSSA) is worried that they will be offered salary increases that the university will be unable to pay if there is reduced enrolment. 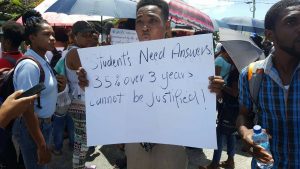 The University of Guyana Students Society (UGSS) intends to vigorously oppose a hike in tuition fees  in the Council meeting but if Council agrees to go ahead, the student body warned of intensified protests to force the authorities to reverse the decision. At the same time, the UGSS said it would push for greater transparency and accountability in the spending of funds by the UG administration. “However, if they do go ahead with the increase we already have an action plan in place of being very aggressive  with the UG admin for accountability and transparency. We want detailed account of all monies being spent and we are going to keep protesting every single action that is being taken and we are going to demand more consultation,” UGSS spokeswoman, Christina Basil told Demerara Waves Online News.

She said the first time they were told of a planned 20 percent increase in tuition fees was on March 18, 2017.

The Vice Chancellor said UG did not get the 40 to 45 percent increase for recurrent expenditure, leaving the institution in a bind to find monies to satisfy demands by staff for increased salaries. “You have got to find a way in order to what we want to do including paying salaries. We have got to find a way of increasing the government subvention and to increase fees,” he told Demerara Waves Online News.

“No increase, no increase,” “We ain’t paying that,” , “35 percent- No way, no way,” and “Raise the standards, not the fees” they  chanted.  If the proposed increases are approved by Council, most of the students- except those in law and health sciences- will have to pay GYD$184,000 per year minus the facilities fee of GYD$50,000.

The students said that although they have been each paying a GYD$50,000 facilities fee- more than GYD$350 million- the washrooms remain in a deplorable condition and internet connectivity at the Turkeyen Campus is extremely. One student said he and classmates have been provided with a piece of plywood on a table as their drawing board.  Second year law student, Jerome Mahase also expressed concern about the hot and uncomfortable conditions of classrooms and the quality of tuition being provided by several lecturers. “Half of the students always fail in those courses. Don’t you think something is wrong with those lecturers? They need to look at these people. They probably have doctorate degrees but they are incapable of teaching,” he said.

Using a section of the 2017 National Budget to argue that there is no need for an increase in tuition fees, Yog Mahadeo said the tertiary institution spent GYD$157 million of the GYD$173 million subvention and the remainder was returned to the National Treasury. “If you can’t manage the funds you are getting, then why you are charging the students more,” said Mahadeo, a former Chief Executive Officer of the Guyana Telephone and Telegraph Company (GTT).  He questioned where the students would be getting the monies to pay the increased fees. Statistics, he said, also shows that UG recorded a GYD$97 million profit in 2016 and a GYD$15 million profit this year. Mahadeo said no monies have been budgeted for repairs and maintenance of buildings in the 2017 budget, while employment cost is expected to increase to GYD$400 million.  “The improvement they are saying is not reflected in the books,” he said.

With regards to the low turnout out of a student population of about 8,000 students, students said many of their colleagues were sitting examinations, at work or attending classes.