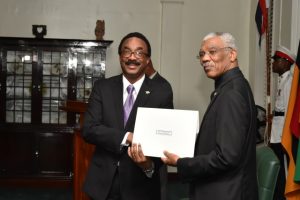 Head of State President David Granger, has called on Attorney General and Minister of Legal Affairs, Basil Williams, to explain his actions over the recent reports he allegedly issued death threats to a sitting Judge—Justice Franklin Holder.

President Granger made the disclosure today (March 30, 2017) during a brief engagement with media operatives at State House after the swearing in ceremony for the Mayors and Deputy Mayors.

The President was asked to weigh in on the debacle and told reporters, “we have heard one side in the media I have asked the Attorney General for his side.”
Former Attorney General Anil Nandlall, last week charged that Minister Williams had threatened Justice Holder, forcing him to walk out on the court matter he was presiding over, without adjourning.

He subsequently complained to the Chancellor of the Judiciary, over remarks reportedly uttered by Williams during the now infamous matter involving defendant, Carvil Duncan—charged with fraud.

According to President Granger, “I have asked for an explanation of the matters which were reported to me and when I have had that opportunity I will respond to him and the Chancellor of the Judiciary but I am very confident that the latter will be resolved.”

The President quipped, “in Law there is the principle of hear the other side, so we musn’t jump to conclusions, so I want to hear both sides.”

Justice Holder in his complaint to the Chancellor said, Williams had said to him in court, “I could say what I want to say and however I want to say it, I have always been like that.” Holder According to Justice Holder, “Immediately after hearing these words, I rose from the Bench and went into my Chambers. I did not adjourn the matter, nor did I give any instructions to the parties.”

Attorney General and Minister of Legal Affairs Basil Williams, has publicly denied issuing any threats to Justice Holder and has instead claimed

The Judge in his letter to the Judiciary called for apology in court by the Attorney General.
Williams yesterday told media operatives he has a copy of the letter penned by Justice Holder to the Chancellor and he will be responding in writing.

Williams said he is already in receipt of a number of statements on his behalf by witnesses to the incident.
According to Williams was quick to point out however, “I admire the judge for the declaration that the allegation that I threatened to kill him that was not so.”

Former Attorney General and Minister of Legal Affairs Anil Nandlall—Duncan’s Defense Attorney—had publicly claimed Williams issued a death threat to Justice Holder which caused him to walk out on court case he was presiding over, without formally adjourning the matter.

The incident generated a heated public debate in tandem with a tit-for-tat between Williams and his predecessor, Nandlall.

Williams has since said he is not “unprepared to work with the learned Judge to resolve what was a fleeting engagement after the business of the day was concluded.”

The Attorney General thanked Justice Holder for “doing the right thing and exposing the iniquity of Nandlall” and posited, “that after nearly three hours of barracking by Nandlall, any reasonable person could fall prey to transferred frustration.”