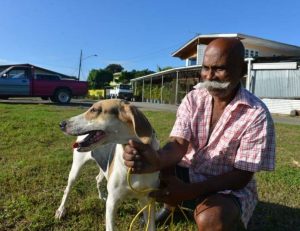 Dogs like this one owned by hunter Francis Guelmo are being stolen. Photo – AP/David MacFadden (Photo taken from Trinidad Express)

(TRINIDAD EXPRESS).- PRIZED hunting dogs are being “dog-napped” from Trinidad, trafficked off the island, and sold to Guyanese hunters to track down wild meat which is then illegally sold to Trinidadians.

This is the claim being made by local hunter Ramsaran Teeluck who traveled to Guyana last week in search of his hounds.
The 66-year-old deer hunter of Penal Rock Road, says he lost three prized deer hunting dogs in the Moruga forest since the hunting season opened.

“Last year I lost two and one this year in the same area in Moruga. I spoke to another hunter who said that he too losing his hunting dogs. When I investigate I get to find out that local fellas stealing the dogs when we let them go to hunt and selling them to boatmen by the port. The dogs going over to Guyana and they using it to hunt over there,” he said.

Teeluck said: “As you know Guyana forest is big and when they hunt over there they coming back to the port and selling the wild meat for people here. This looks like something that has been happening a long time and nobody knows about. Not even the authorities.”
Teeluck said while in Guyana, he met another hunter who confirmed his story of stolen hunting dogs from Trinidad being shipped to Guyana to hunt.

He said: “I didn’t talk to the others when I was there because they would figure out that I am from Trinidad. So this man tell the hunters that I was a ‘big man’ looking for hound dogs and they said that the best dogs for hunting coming from Trinidad.”

Teeluck said that caring for hunting dogs is expensive, particularly those trained to hunt deer.

He said some hunters either mark their dogs with a number, a telephone contact or have GPA trackers on them. Yet, the dogs are being smuggled out of the country.

He is claiming that the trade occurs at the Morne Diablo and Moruga fishing ports where boatmen are shipping the dogs for “the right price,” he said.

Unfortunately, Teeluck’s dogs were not found and he returned home empty handed. Teeluck is now calling on the authorities to investigate this matter.

He said that more than dogs are being trafficked in and out of the country and that is likely to continue if the authorities do not step in and address the issue.
Teeluck also raised concerns over unhealthy wild meat being smuggled into the country without the proper quarantine and detection for diseases and then being sold to unsuspecting wild meat lovers for hundreds of dollars.

He said: “People here don’t know what they buying. Not all the wild meat is from local hunters. Most of the hunters are hunting for sport and when they have excess they sell off. But when you see someone with a large amount, with those signs all over, you don’t know where that really coming from.”

Last October, the Express reported on seven Venezuelan nationals being detained by authorities over a suspected animal smuggling racket. A flock of sheep packed into the pirogue was seized on beach in Los Iros, Cedros. Police reported that the animals appeared to be diseased, with warts around their mouth and nostrils.