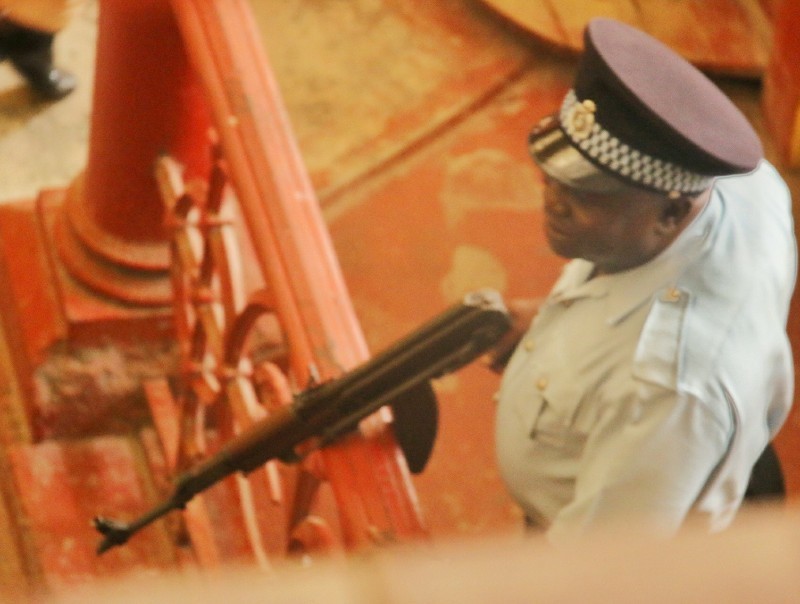 An officer stands ready with his firearm.

Police officers at the Georgetown Magistrates Court this morning, March 21, struggled to keep three raucous inmates under control, as they refused to be placed in the holding cells at the police outpost.

Murder accused Orin Arthur, Yuri Vaswyck, and Steven Prescott were uncontrollable, as one of the men, Arthur, made clear his demands that he wants to see his lawyer.

The men reportedly also refused to be handcuffed.

The commotion started as soon as the prisoners arrived at the court from the Camp Street prison.

Just as the trio exited the police truck, three sets of handcuffs were flung from the court’s Avenue of the Republic main entrance, and into the compound of the historic St Andrew’s Kirk across the road. 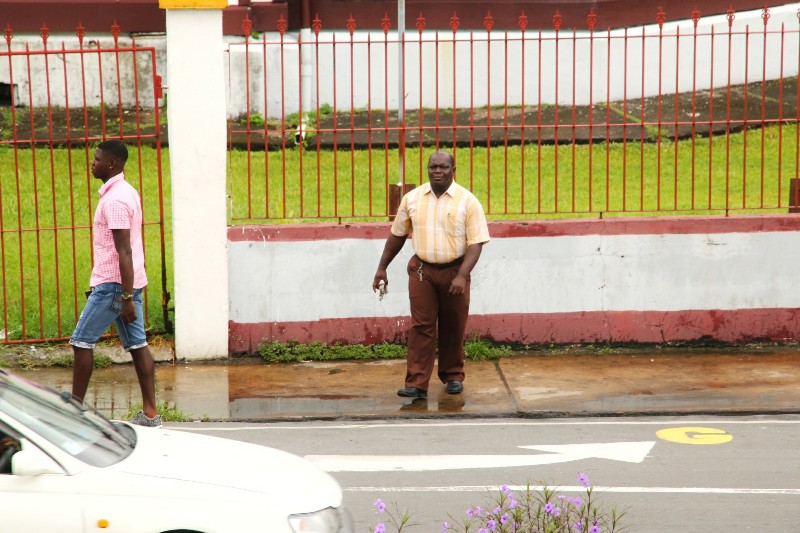 A public spectator walks across the road to retrieve one of the handcuffs.

A public spectator then went to retrieve the handcuffs.

Officers stood at the entrance of the police outpost forming a human wall to bar the three excited inmates from exiting.

Meanwhile, other heavily-armed officers stood outside the doorway with high-powered rifles. 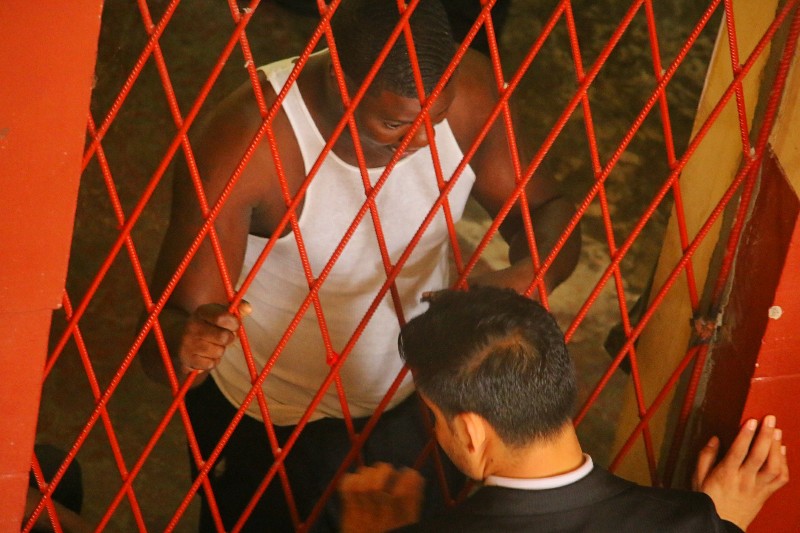 Arthur, after being allowed to see his lawyer, later entered into a verbal altercation with police rank, Downer, who had a high-powered rifle in his hand, pointing it directly at Arthur, who stood behind the window grilling of the police outpost.

“Shoot me!” Arthur yelled at the officer, Downer, who directed a series of colourful words to the inmates.

The police, seemingly agitated by the ordeal, had previously asked for the court steps to be cleared of public spectators and members of the media.

There were some observers who noted one of the murder accused had threatened to collect one of the officer’s weapons.

Police officer Downer, who was later in the verbal altercation with the inmate, had even threatened the Demerara Waves Online News reporter to have him arrested, if he did not remove from the stairway.

Members of the public, including the media, cleared the court steps, and moved to the upper floor of the court, where there is a balcony overlooking the police outpost.

When officers saw the gathering, one rank specifically instructed, “members of the media please go inside the courts.”

Meanwhile, the prisoner could be heard loudly requesting the attention of the media.

The entire ordeal lasted for approximately one hour. The three inmates were then loaded onto the police truck around 11:05am and escorted back to the Camp Street Prison. 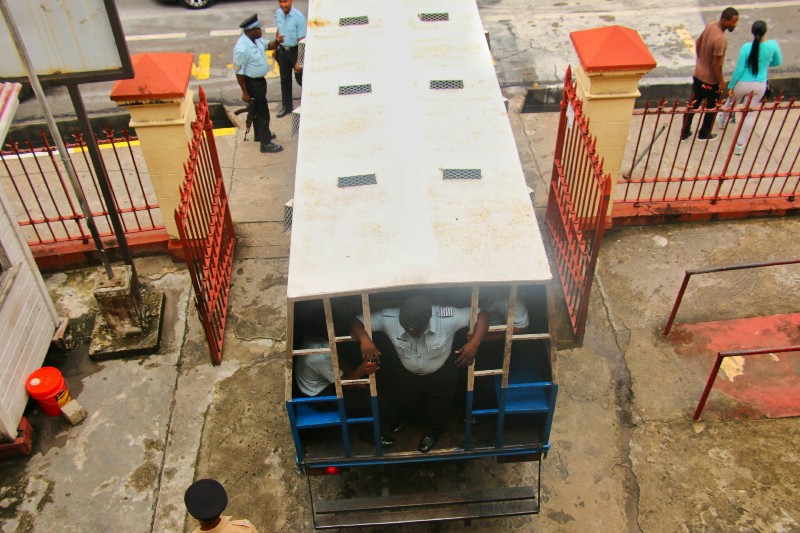 Prison van leaves the compound of the Georgetown Magistrates’ Court with the raucous inmates.

This is not the first time police officers and inmates have gotten into exchanges. There were instances where prisoners refused to go up the prisoner shaft which opens into the court rooms.

During one instance, an inmate accused of murder walked up the court steps while pulling themselves away from officers who attempted to grab him at the elbow.

“Clean out duh shaft and we gon go up it!” the murder accused inmate said a few days ago as he walked up court steps, where members of the public stood. A police rank then had cause to take a broom and sweep out the shaft.

Arthur has another murder charge. He is as accused along with Rayon Paddy of murdering Sterling Products security guard, Wilfred Stewart, in December 2014.

Paddy was one of the 17 prisoners who burned to death in the 2016 Camp Street Prison fire.

Early in February last, a prisoner had reportedly stabbed another inmate during an altercation at the Georgetown Magistrates’ Court.

Although police carried out a search on all the inmates then, no report was made as to whether any deadly weapons were found. The media was, however, able to capture an inmate wielding a knife while standing on a desk on the police outpost. 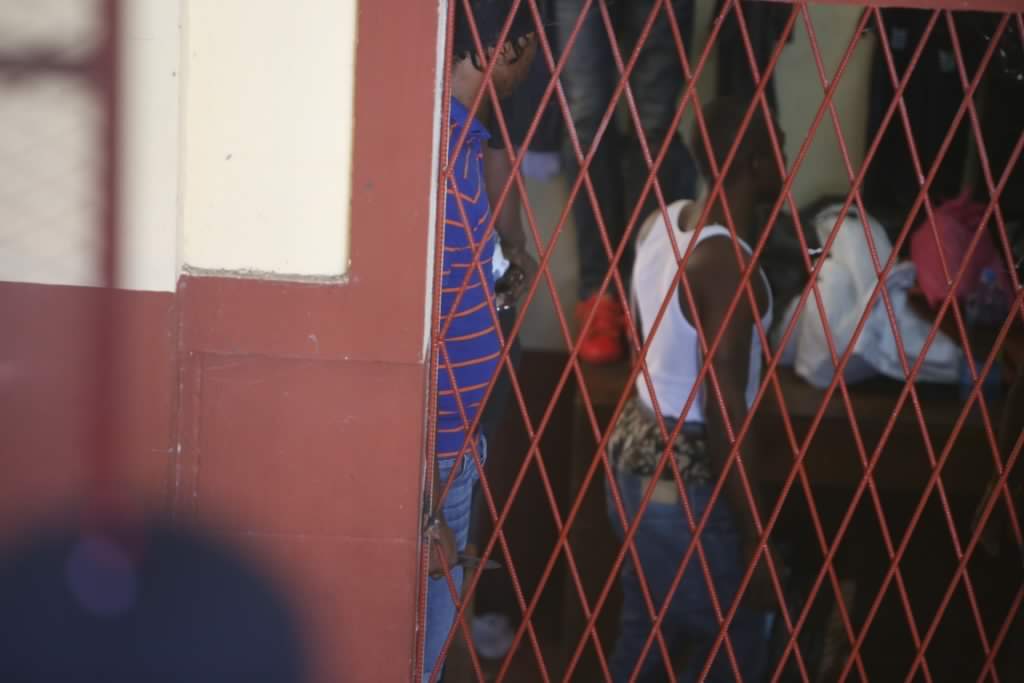 Inmate wielding a knife at the police outpost of the Georgetown Magistrates Court last month.

2017-03-21
Derwayne Wills
Previous: Stolen hunting dogs turning up in Guyana …hunter says he has evidence of the racket
Next: GECOM Chairman must not be an activist or associated with any political party- Granger