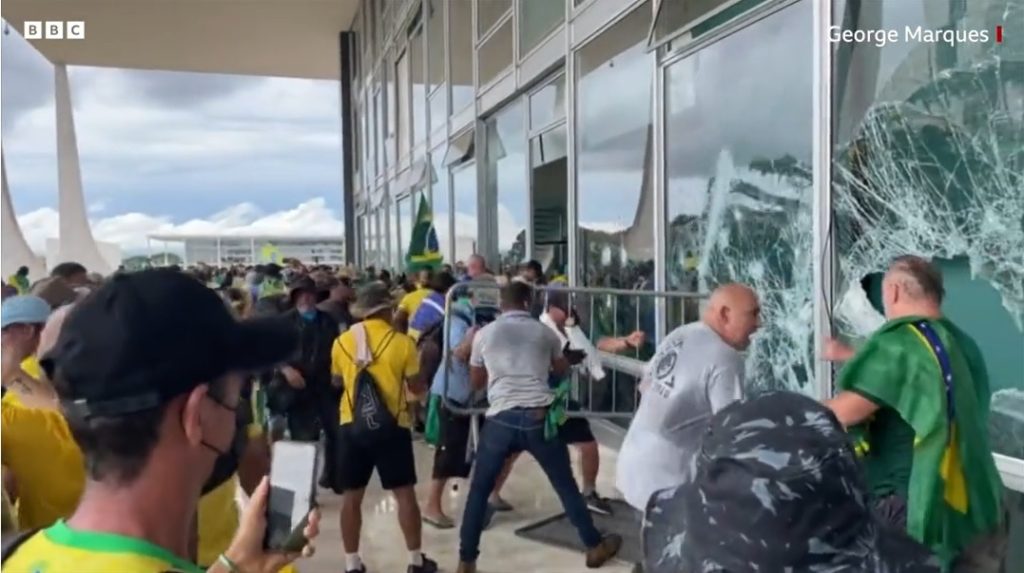 Supporters of the ousted far-right leader also stormed the Supreme Court and surrounded the presidential palace.
But police regained control of the buildings in the capital Brasilia on Sunday evening after hours of clashes.
Justice Minister Flavio Dino told local media that some 200 people had already been arrested.

The dramatic scenes – which saw thousands of protesters clad in yellow Brazil football shirts and flags overrun police and ransack the heart of the Brazilian state – come just a week after Lula’s inauguration.
The veteran left-wing leader was forced to declare emergency powers before dispatching the national guard into the capital to restore order.

He has also ordered the closure of the centre of the capital – including the main avenue where governmental buildings are – for 24 hours.

Mr Dino said some 40 busses which had been used to transport protesters to the capital had been seized and he called the invasion an “absurd attempt to impose [the protesters’] will by force”.

Mr Bolsonaro has repeatedly refused to accept that he lost October’s election and last week left the country instead of taking part in inaugural ceremonies, which would have seen him hand over the iconic presidential sash.

The 67-year-old – who is believed to be in Florida – condemned the attack and denied responsibility for encouraging the rioters in a post on Twitter some six hours after violence broke out.

Mr da Silva – better known as Lula – said there was “no precedent in the history of our country” for the scenes seen in Brasilia and called the violence the “acts of vandals and fascists”.
And he took aim at security forces whom he accused of “incompetence, bad faith or malice” in the failure to stop demonstrators accessing Congress.

“You will see in the images that they [police officers] are guiding people on the walk to Praca dos Tres Powers,” he said. “We are going to find out who are the financiers of these vandals who went to Brasilia and they will all pay with the force of law.”
Video shared by the Brazilian outlet O Globo showed some officers laughing and taking photos together as demonstrators occupied the congressional campus in the background.

US President Joe Biden tweeted: “I condemn the assault on democracy and on the peaceful transfer of power in Brazil. Brazil’s democratic institutions have our full support and the will of the Brazilian people must not be undermined.”
Some protesters smashed windows, while others reached the Senate chamber, where they jumped on to seats and used benches as slides.
Videos on social media show protesters pulling a policeman from his horse and attacking him outside the building.
Footage broadcast by national media show police detaining dozens of protesters in their yellow jerseys outside the presidential palace.

Other suspects – whose hands were bound behind their backs – are also seen being led out of the building.
Protesters had been gathering since morning on the lawns in front of the parliament and up and down the kilometre of the Esplanada avenue, which is lined with government ministries and national monuments.

Security had appeared tight, with the roads closed for about a block around the parliament area and armed police pairs guarding every entrance into the area.

The BBC had seen about 50 police officers around on Sunday morning local time and cars were turned away at entry points, while those entering on foot were frisked by police checking bags.

Demonstrators were quick to defend their actions when approached by reporters.

Lima, a 27-year-old production engineer, said: “We need to re-establish order after this fraudulent election.” “I’m here for history, for my daughters,” she told AFP news agency.

But others in the capital expressed outrage at the violence and said the attack marked a sad day for the country. “I voted for Bolsanaro but I don’t agree with what they’re doing,” Daniel Lacerda, 21, told the BBC. “If you don’t agree with the president you should just say it and move on, you shouldn’t go hold protests and commit all the violence like they’re doing.”

And many are drawing comparisons with the storming of the US Capitol on 6 January 2021 by supporters of Donald Trump, an ally of Mr Bolsonaro.

Bolsonaro supporters created camps in cities across Brazil, some of them outside the military barracks. That is because his most ardent supporters want the military to intervene and make good elections that they say were stolen.
It looked like their movement had been curbed by Lula’s inauguration – the camps in Brasilia had been dismantled and there was no disruption on the day he was sworn in.
But Sunday’s scenes show that those predictions were premature.

Leaders from Latin America have condemned the violence:

And French President Emmanuel Macron said the “will of the Brazilian people and the democratic institutions must be respected” and pledged the “unfailing support of France” to Lula.

2023-01-08
Denis Chabrol
Previous: OPINION: One Mocha today, many Mochas in aggregate, then what?
Next: Antigua and Barbuda scraps work permits for CARICOM, Dominican Republic nationals