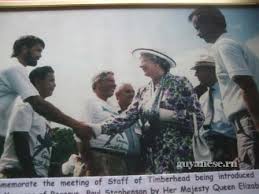 Britain’s Queen Elizabeth II during a visit to Timberhead, Guyana in 1994.

The Queen last visited this former British colony in  February 1994. Then, she had visited several places of interest including Santa Mission and Timberhead.

The Queen had also addressed a special sitting of the National Assembly during that visit.

She had been accompanied by her now late husband Primce Phillip, Duke of Edinburgh,

During her Caribbean tour, she had also visited Dominica, Belize, Jamaica and The Bahamas.

The Queen is also the Head of the Commonwealth, an organisation of former British colonies. She missed the recently-held Commonwealth Heads of Government Summit in Kigali, Rwanda.

It was in the run-up to her visit to Guyana that the then government had been convinced to return the Queen Victoria statue to the forecourt of the Highvisit in Georgetown.  During the Forbes Burnham administration it had been removed and dumped aback the Botanical Gardens.

Below is a full BBC report on the passing of the Queen.

Queen Elizabeth II, the UK’s longest-serving monarch, has died at Balmoral aged 96, after reigning for 70 years.

Her family gathered at her Scottish estate after concerns grew about her health earlier on Thursday.

The Queen came to the throne in 1952 and witnessed enormous social change.

With her death, her eldest son Charles, the former Prince of Wales, will lead the country in mourning as the new King and head of state for 14 Commonwealth realms.

In a statement, Buckingham Palace said: “The Queen died peacefully at Balmoral this afternoon.

“The King and the Queen Consort will remain at Balmoral this evening and will return to London tomorrow.”

All the Queen’s children travelled to Balmoral, near Aberdeen, after doctors placed the Queen under medical supervision.

Her grandson, Prince William, is also there, with his brother, Prince Harry, on his way.