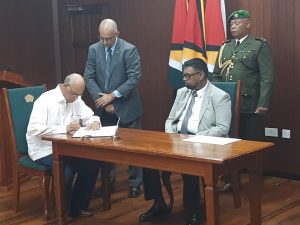 The President said he hoped that Mr Rohee’s previous experience at the Elections Commission and public life would help to strengthen democracy. “The will of the people is the most fundamental right that must be respected,” he added.

2022-08-16
Denis Chabrol
Previous: Rohee to be sworn in as GECOM Commissioner today
Next: ‘I make law-based decisions’- GECOM Chairman in response to Norton