‘I make law-based decisions’- GECOM Chairman in response to Norton 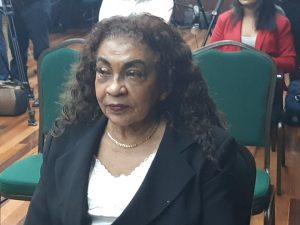 Chairman of the Guyana Elections Commission (GECOM), Retired Justice Claudette Singh on Tuesday dismissed suggestions that she is biased because she votes with the People’s Progressive Party Civic (PPPC)-nominated election commissioners.

Opposition Leader Aubrey Norton has repeatedly called for her to resign or face unspecified action in order to professionalise that election management authority.

But Justice Singh on Tuesday said all her decisions are in keeping with the law rather than side with PPP-nominated election commissioners  on the seven-member Commission. “I’m not aware that I do something like that. Anything I do, I do in accordance with the law and I try, as a former judge, I always try to uphold the rule of law,” she Saud.

The GECOM Chairman said her decisions in Court and at GECOM would be criticised by those who are dissatisfied. “There will be criticisms. If you sit on the bench and you make an adverse decision,the party who loses would say you are biased, you take a bribe, whatever..so there is always a way you can criticise a decision. That’s up to them!,” she told reporters.

Responding to Mr Norton’s calls for her to resign, she said. “when the time comes I would leave.”

Local Government Elections are due to be held in November, according to GECOM’s work plan.