US to assess Guyana’s hydropower potential 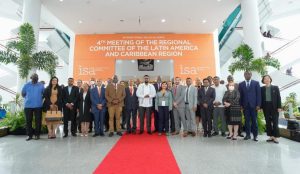 President Irfaan Ali and delegates at the Latin America and Caribbean meeting of the International Solar Alliance.

President Irfaan Ali on Thursday said the United States (US) would be assisting Guyana in jointly assessing its hydro-electricity generation capacity.

He told the opening of a Latin America and Caribbean meeting of the International Solar Alliance (ISA) that is one of the outcomes of his recent one-week visit to Washington DC where he held talks with the US Department of Energy.

Dr Ali said a team of Guyanese experts has since been established to work with counterparts from the energy department. “We have been able to put together a technical group very quickly a technical group from Guyana to work with the Energy Department at a very high level to examine our hydro-project because the hydro potential is enormous,” he said.

No specific reference was made to the Amaila Falls Hydropower project.

Weeks before journeying to meetings with the US Secretary of State and Energy Secretary, the Guyana government scrapped negotiations with a Chinese state-owned company, China Railway, oil and gas study for the construction of the US$700 million Amaila Falls Hydropower project.

The US and Guyana days ago signed a memorandum of understanding with the US Export-Import Bank for a US$2 billion line of credit that could be tapped into by the government and the private sector for mostly infrastructural projects in this South American nation.

Previous: Three porters pinned to death in Kuru Kururu accident
Next: Guyana’s oil will be in long-term demand, despite transition to clean energy