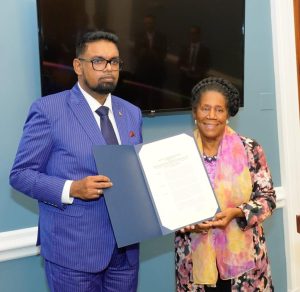 United States (US) Congresswoman for Texas, Sheila Jackson-Lee on Thursday evening, at a dinner hosted by members of the Congressional Black Caucus, has hailed President Irfaan Ali’s election almost two years ago as a “triumph of democracy.”

“It goes on to assure that you are steadfast in your commitment to the wellbeing and the future of the Guyanese people, and through your outstanding character as a leader, you are going to help them overcome struggles that they may not foresee…it goes on to indicate that your election was a triumph of democracy and a promise of hope for the Guyanese people,” she said in referring to the Certificate of Congressional Recognition.

The Caribbean Court of Justice (CCJ), in the coming weeks, is expected to decide the fate of an election petition by the opposition coalition of A Partnership for National Unity+Alliance For Change (APNU+AFC). Ali’s governing People’s Progressive Party (PPP) and key Western Nations as well as regional and international organisations had in March, 2020 accused APNU+AFC of  being part of a plot to be declared winner while the then governing coalition had called the authenticity of thousands of ballots cast on the East Coast Demerara into question because of missing d0cuments.

Congresswoman Jackson-Lee said Thursday night’s dinner on Capitol Hill “is more than a dinner; it is an affirmation of our mutual love for democracy and our mutual love for treating the people we represent with the highest level of dignity, sympathy, empathy and solutions.”

A number of other Democratic Congressmen, US President Joe Biden and Vice President Kamala Harris have identified shared prosperity, inclusive growth and transparency as key elements in US-Guyana relations. 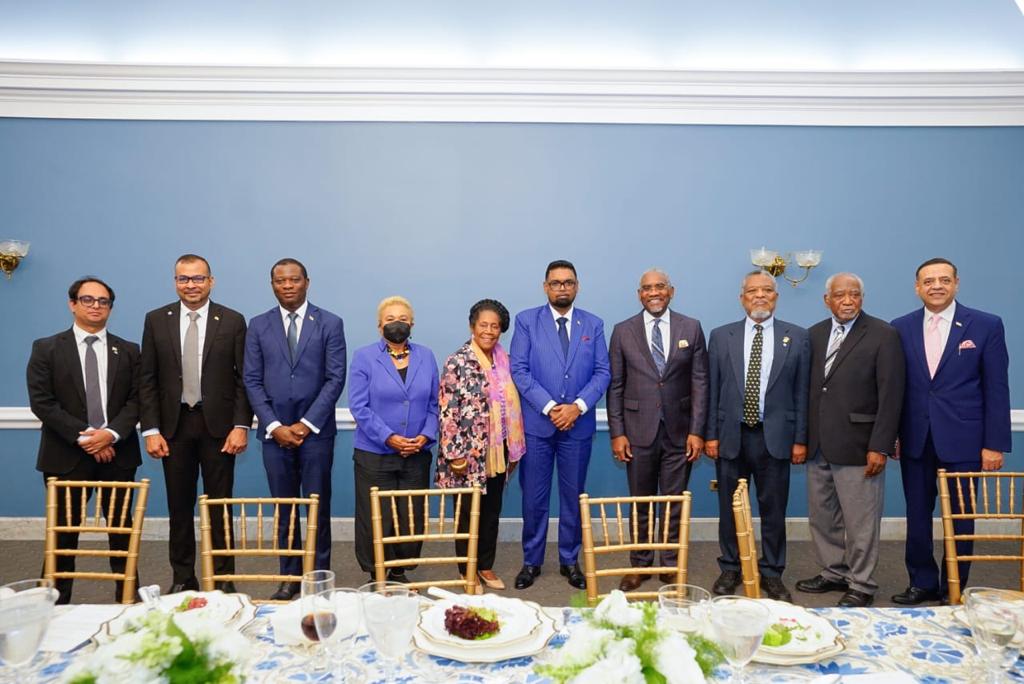 The Texas Congresswoman praised Dr Ali for “the kind of leadership that can go into many doors around the world and view the people as equal and show them respect so that we can have solutions.”

“I think what you have exhibited here this evening and your travels throughout the day, and your eagerness to speak with one of our members who was not able to come, to be able to show him the new Guyana is a very important position to take Mr President. I am very proud to have the opportunity to meet with you.” No mention was made of Congressmen Hakeem Jeffries, Hank Johnson and Congresswoman Yvette Clarke being in attendance at Thursday night’s event. Jeffries in particular has cited the need for an end to discrimination in Guyana, an accusation that has been already rejected by the Guyana government.

She told President Ali that she was impressed that he was not only “planting” a future for Guyanese but for the entire region.

“…Your light shines, and hopefully, it can draw in other countries which you border, and we can find better ways to solve problems. I applaud you, and I am delighted to be one of the hosts.”

The Chairman of the House Foreign Affairs Committee, Congressman Gregory Meeks, spoke of his “fantastic” meeting with President Ali.

“I just had a fantastic meeting with President Ali, talking about the relationship between the United States of America and Guyana and his leadership. To be quite frank, he is an individual that has a vision of how to make sure that tomorrow is better than today. Bringing all of the people of Guyana together; thinking with the vision of the economy in Guyana; working together collectively with various other countries in the forefront with reference to making sure that you deal with agriculture so that the people are not starving and hungry.”

He said he was also impressed by President Ali’s plans on how the United States can work with Guyana and the rest of the region in enhancing its partnership.

“So, it was a very important and a very good meeting that I had with President Ali.”

In his remarks, President Ali pointed to the importance of networking as a key component of diplomacy. He emphasised that sharing ideas and opinions contributes to building trust and enhancing relationships.

“We have adopted a new approach to diplomacy…. An important aspect of diplomacy is networking, and when you build friendships, you must be able to share that network and integrate that network in building trust and enhancing relationships; that is a feature of democracy you would have seen at work this evening.”

The President also recognised the astute leadership and positive influence of the Congresswoman, who has served as the US Representative from Texas’ 18 Congressional District since 1995.

“I want to assure you of our full support, of our openness. Any questions you may have, any clarifications you need, you call directly; we are open and ready to provide those.”

2022-07-29
Denis Chabrol
Previous: No salaries for suspended parliamentarians
Next: US-based Guyanese organisations ask US Attorney General to probe Nandlall’s use of FBI to go after critics