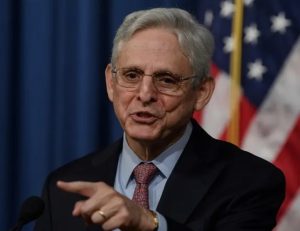 “We the representatives of the below stated Guyanese-American organisations hereby respectfully request an investigation into unlawful and nefarious attempts by the Attorney General of Guyana, Mr. Anil Nandlall, to use the United States Federal Bureau of Investigations (FBI) to target his critics, and personal and political enemies for revenge,” they told Mr Garland in a letter dated July 26, 2022.

The letter, which was signed by representatives of several organisations including the PNCR’s North American Region, A Partnership for National Unity+Alliance For Change (APNU+AFC) North American Support Group, AFC Brooklyn Representative and the Guyanese Organisations Against Racism (GOAR), said the Guyanese Attorney General  has been complaining to the FBI without any reasonable grounds about Black Guyanese American community leaders and talk show hosts in the US who criticise him. ”

“Consequently, Mr. Nandlall has continuously lied to the FBI that Guyanese residing in the United States, who condemn his, and his government’s racism, are using social media to incite racial hostilities and domestic terrorism in Guyana. He has been providing names of his, and his government’s political enemies to the FBI in the hope that said individuals will be investigated without basis or probable cause under US law,” the letter states. Mr. Nandlall and the People’s Progressive Party Civic (PPPC)-led administration have consistently denied practicing racial discrimination.

The letter to the US Attorney General was triggered by Mr Nandlall saying that one of the issues that he discussed earlier this month with FBI officials when they visited him in Guyana earlier this month were already lodged complaints against those spewing  racial hostilities and creating ethnic strife among segments of the Guyana population, inciting and aiding and abetting riotous conduct and even domestic terrorism in Guyana.

However, the signatories told the US Attorney General that  “They audaciously claim that every condemnation of their racist policies and practices is unlawful; incites racial hostilities and domestic terrorism and violates Guyana’s Racial Hostilities Act. We reject this absurdity out of hand!”

Among the signatories also is President of the Caribbean Guyana Institute for Democracy Rickford Burke for whom the Guyana Police Force has issued a wanted bulletin for  the excitement of hostility or ill-will on the grounds of  race in violation of the Racial Hostility Act; sedition, use of a computer system to intimidate in violation of the Cyber Crime Act; seditious libel, inciting the provocation of the breach of peace, and inciting public terror.

They said those who speak out against corruption, anti-Black racism and the killing of Black opponents such as former Guyanese talk-show host Ronald Waddell and activist, Courtney Crum Ewing several years ago are being targeted through the FBI. “Hence, in an attempt to silence their critics and eschew international exposure of their apartheid method of governance, they make these preposterous claims, and are attempting to use US law enforcement to silence those who speak out from the US,” they said.