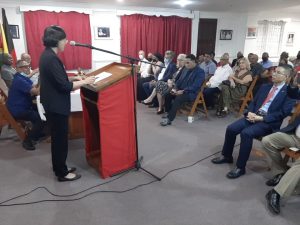 China on Thursday played down any concerns about the United States’ (US) renewed efforts this week to carve out deeper relations with Guyana, amid fears by former President of Guyana Donald Ramotar of a hidden Western agenda to displace that Asian country from Latin America and the Caribbean.

China’s Ambassador to Guyana,  Guo Haiyan told a public discussion that marked the 50th anniversary of China-Guyana diplomatic relations that President Irfaan Ali was paying an “important visit to Washington” and earlier the Chinese and American Presidents had a telephone conversation. “It’s good to see the diversification of international partners for Guyana,” the Chinese envoy said. Noting that over the past 40 years, China has benefitted from capital, technology, equipment and management experiences from the US, Japan, European countries and Russia, she reiterated the importance of Guyana forging partnerships. “So, we fully understand that Guyana also needs partners from around the world so it’s good for Guyana that all these partners make contributions to Guyana’s development,” she told the discussion organised by the Guyana Peace Council which is based at the Cheddi Jagan Research Centre.

But former President Ramotar said it was clear that Western Nations were, unlike China, not genuinely interested in helping Developing Nations like those in Africa, Latin America and the Caribbean.  “While I appreciate and I am happy that they are coming on board to help developing countries with infrastructure works and other works, as China is doing now, what is of worry for me is the motivation for why they are doing it. They are not saying they are doing it to help the Third World countries; they are doing it to conquer China’s influence in the Third World and that motivation to me is not the best motivation and when you begin from those premises, I think you can end up in all kinds of contradictions and all kinds of struggle,” he said. 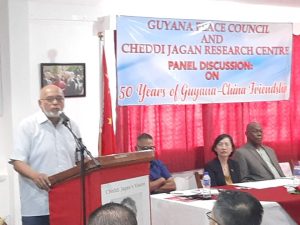 Among the attendees were the United Kingdom’s High Commissioner to Guyana, Jane Miller and European Union Ambassador to Guyana, Fernando Ponz Canto.

During President Ali’s visit to the US this week, Foreign Affairs Minister Hugh Todd and the Chief Executive Officer of the US’ Export-Import (EXIM) Bank signed a memorandum of understanding for a US$2 billion line of credit for Guyana and the Caribbean.

China has been funding several infrastructural, health and other projects in Guyana, some through concessional loans.

Quizzed on China’s relations with Guyana, Dr. Ali told a forum that it was true that the US had neglected the region for several years. However, he cited the EXIM-Guyana accord as an example of the resetting of relations between the Caribbean and the US.

In apparent reaction to perceptions in some quarters that Chinese infrastructure is of poor quality, she said Chinese banks do not lend monies for projects without ensuring that the structures would be built to required standards. “No bank will lend to a project of poor quality otherwise you cannot get the repayment so banks in China are no exception. The banks will request adequate feasibility study and will ask a third party to review it to make sure about the sustainability of the project,” she said.

2022-07-29
Denis Chabrol
Previous: US-based Guyanese organisations ask US Attorney General to probe Nandlall’s use of FBI to go after critics
Next: Guyana gets drugs to treat potentially cancer-causing hepatitis C