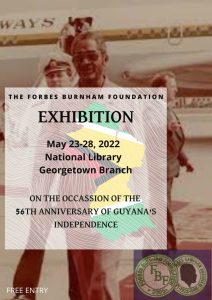 The National Library on Monday turned down a previously granted permission to The Forbes Burnham Foundation to hold an exhibition to mark Guyana’s 56th Independence Anniversary but there appears to be a mix up over the real reason for doing so.

Foundation Chairman, Vincent Alexander said approval was granted by the National Library on April 25, 2022 to hold the pictorial exhibition in the foyer of that facility on Church and Main Streets, Georgetown.

However, he deemed the decision by the library to pull the plug on the event at 8:45  AM on May 23, 2022- less than two hours before the event was due to start- to be politically inspired because the library would be using the foyer for its own activity.  “The Foundation can come to no other conclusion other than that a political directive was received to disallow the Burnham Foundation the use of the National Library Foyer to mount an Independence exhibition,” he said.

But a high-level source told Demerara Waves Online News that the Librarian was instructed to first acquire information about the content of the exhibition. “If you have someone coming in to a State facility such as the National Library, it has to be factually verified,” the official said.

Mr. Alexander said that was never told to him and he would have been willing to provide that information to the National Library if it had been requested. He said the Foundation representatives visited the Library last Wednesday and finalised arrangements.

He noted that the exhibits are “really a lot of pictures associated with Independence…It’s not a PNC (People’s National Congress) exhibition. It’s an exhibition depicting what occurred at independence.”

Mr Alexander pointed out that the “very first exhibit” is one with late Dr Cheddi Jagan and Mr Burnham and it says “where it all began.”

Dr Jagan founded the Political Affairs Committee that later evolved into the People’s Progressive Party and after the split, Mr. Burnham founded the PNC under whose administration Guyana was granted independence from Britain on May 26, 1966 largely due to Cold War reasons, historical records show. Dr. Jagan and  Mr. Burnham, under the PPP, had been united in their fight for independence.