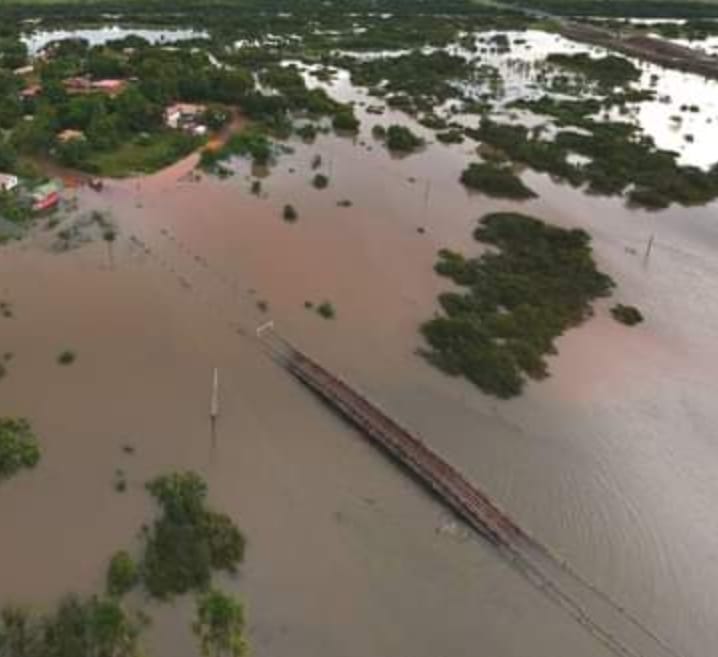 Flood waters from steadily rising rivers in neighbouring Brazil on Monday forced more than 50 persons in Lethem, the capital of  Region Nine (Upper Takatu-Upper Essequibo), to evacuate their homes and seek refuge in now filled-to-capacity government shelters, a regional spokeswoman said.
Ms. Norma Griffith said in addition to the 19 families at shelters, including little children, others have abandoned their homes and have gone to stay with relatives and friends who are living on higher ground. The government’s disaster response agency, the Civil Defence Commission (CDC) was expected to dispatch a team to Region Nine later Monday to conduct an assessment and provide additional accommodation as more persons are likely to be evacuated from their homes.  “The Regional Democratic Council in collaboration with the Lethem Town Council through the Regional Disaster Risk Management Committee is proactively working assiduously to relocate families affected by the floods to shelters and will continue to do so as need arise,” the regional administration said in a statement.
While there has been little rainfall in Lethem and surrounding villages, the Region Nine spokeswoman said the flood water is rising at a rate of two inches per hour. “There is no rain at this time. It’s pretty hot and the water is still rising… The water is submerging all bridges and roads,” she told Demerara Waves Online News.
There are also reports of residents losing cash crops and livestock.

Karaudarnau Village, as well as Bashaizon, a satellite village of Achawib village , a small community close to the Takutu River has also been flooded.

In a statement issued by the Region Nine administration, the reasons given for the flood are heavy rainfall and over- topping of the Rio Branco river in Brazil and the Takutu River over the past few days. “Inundated areas in the Township of Lethem and several villages in are being monitored as the waters continue to rise,” the Regional administration said.

The Regional Council said it has provided boats for school children and Teachers attending St. Ignatius Secondary School free of cost, as village boats and private boats  are charging a “small fee.”
Motorists and commuters  were advised to use the back road at the Top end of the airstrip since the road from the airstrip to the round about and the Lethem Radio station is totally  submerged.
Residents were advised to take all necessary precautions during this time and report any impacts as a result of floods.