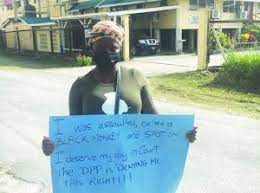 An Afro-Guyanese former policewoman plans will be mounting a legal challenge against the Director of Public Prosecutions (DPP) decision to withdraw a private criminal charge of inciting racial hostility that she had filed against Indo-Guyanese Attorney-at-Law Nirvan Singh.

Shawnette Bollers’ lawyer, Eusi Anderson, said the DPP should  have allowed the Magistrate Court to decide the fate of Mr. Singh. He is the son of former Chancellor of the Judiciary, Carl Singh.

Mr. Anderson said the DPP’s justification to annul the charge of inciting racial hostilities brought under the Racial H0stilty Act was wrong. “The statement contains a factual matrix which is convoluted and replete with critical omissions. The adhesiveness of its foundation to the law is tenuous. The forum to address these issues is not in the court of public opinion but rather in a court of law.,” h said. Through her lawyer, Ms. Bollers has also instructed that, if it becomes necessary, the DPP will face legal action in the civil and criminal jurisdictions of the court.

Amid strong condemnation by the Working People’s Alliance and the People’s National Congress Reform of her decision to quash Ms Bollers’ private criminal charge of exciting racial hostility she filed against Mr. Singh, the DPP in a rare departure from the norm, has explained the reasons for her decisions.

The WPA has already condemned the DPP for her decision to scrap the charge against Mr. Singh, saying that it marked a new low in Guyana’s race relations.  That small but vocal political party also believed that the DPP should have allowed Ms. Bollers’ private charge to be tested in court. “Against this background, WPA views the DPP’s action as a wanton abuse of power that sends an  ominous signal to the society at large. It is tantamount to the use of institutional power to condone racism. On a matter that is so socio-politically sensitive and so central to the stability of our country, the DPP has come down of the side of the accused rather than the accuser.

This is the kind of activism from the DPP’s chambers that potentially rocks confidence in the Justice system. The role of the DPP is not to act as judge and jury as this decision suggests. The role of the DPP is not to stand in the way of justice, but to facilitate justice. At the very least, she should have allowed the accused to have his day in court to defend himself against the accusations. Even if Ms. Bollers’ charges appear unsubstantiated, let the courts decide. It is too sensitive a matter to be determined by a single individual,” the WPA said.

Constitutionally, the DPP enjoys the right to discontinue any case before a judgement is delivered.

The DPP, Shalimar Hack, has essentially stated the charge has no basis because the words the former policewoman alleged that Singh uttered were not done for general reception by wireless telegraphy or telegraphs or reproduced in a public place from a record. She has said that the words used by the suspect were not spoken in order to excite others to act with hostility or ill-will against the complainant.

Ms. Hack also pointed to inconsistencies in Ms. Bollers’ claim that Mr. Singh allegedly spat in her face during the incident on March 20, 2022 at his father’s residence on Middle and Cummings Streets, Georgetown. She said, “this written report on the night of the incident does not state that the suspect willfully spat on the complainant” as she had stated then that “…he was in front of my face spitting up…” but a day later she said in a separate statement that that the suspect “spit in my face” and “stepped away from the door.”

The PNCR had flayed the DPP, before her explanation for her decision to annul the charge, for failing to do so and had suggested that her acti0n had been influenced by other factors. “Understandably, the actions of the DPP will be seen by many as not only unprofessional and unprincipled, but also as a decision influenced by considerations of politics, race, and social status.  Clearly, she is not impartial and is disqualifying herself,” the PNCR had said.