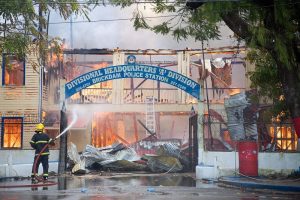 President Irfaan Ali on Sunday said he was “bothered” about the fire that flattened most of the buildings in the Brickdam Police Station complex, headquarters of Guyana’s main police division.

“Why am I bothered? This is coming on the heels of threats made on the capital city from New York and this is not the first time and I’m not going to take this lightly,” he said.

He also noted the findings of arson committed at the Mabaruma Secondary School, North West District. 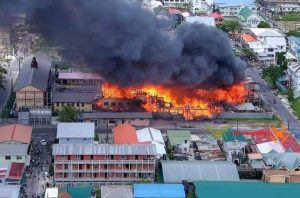 The President said he would be requesting foreign assistance to probe possible links between the alleged threats and the Saturday morning fire that razed the colonial era wooden structures. “I’m going to ask for international support to investigate, to follow any lead  and to ensure  that our capital remains safe and stable,” he said.

Dr. Ali said even as the investigation into the Brickdam Police Station ‘A’ Division Headquarters fire was ongoing, he was concerned and would “would not spare any effort in reaching out for international support.” He said government was examining the likelihood of fires becoming “problematic” due to the “context” of  statements that have been made in the United States.  “We  have to ensure that the population is confident that that is not the case that is why we have to seek international support,” he said.

The President condemned the Guyana Fire Service’s response to the fire that occurred a short distance away from the Brickdam Police Station and said persons would be held “accountable for their actions”  while government continues to make investments. “The response of the fire service was poor, at its best, yesterday and, as President, I hope that the fire service can acknowledge this because if you can’t acknowledge the problem, you can’t deal with it,” he said.

He assailed the firefighters for  the state of the readiness, based on calls by businessmen around the area. He noted that the fire service could not access water from a pool on a well that flows continuously. “This lackadaisical approach, inefficient approach and indifferent approach cannot continue; no it cannot continue,” he said.

Saturday’s fire was aided by a steady north-east wind. Firefighters deployed to the front of the building struggled for several minutes to douse the flames with water and the ladder truck was deployed to the scene more than half an hour after the fire started.

The President said he has since instructed the Head of the Diaspora Unit of the Ministry of Foreign Affairs to acquire the contact information for retired fire chiefs in big cities in the United States and Canada so that they could possibly return to “infuse a level of professionalism.” “The State can’t provide you with basic things as safety equipment for you to wear, as fire officers, and you turn up without them. It means that you are not in any state of readiness to respond to an emergency. It means that from a personal level that you are entrusted to do with the level of seriousness that is necessary,” he said.

He said Home Affairs Minister Robeson Benn has been ordered to put together a team of investigators to probe the response to the fire. Railing against the firefighters’ poor response to an ‘event in your backyard,’ he publicly warned the Guyana Fire Service that such an attitude would not be tolerated and if they could not be regard their work as emergency responders they should consider parting ways.

Back in July, 2015, a fire had destroyed a house next to the Alberttown Fire Station but no one had been knowingly punished for dereliction of duty.

Opposition Leader Joseph Harmon, however, said credited the members of the Disciplined Services for their response to the fire. “I would also like to make important note of the courage and dedication of the firefighters and other members of the disciplined forces who despite the intense flames and danger to themselves, demonstrated professionalism in the most difficult of circumstances,” he said.

Mr. Harmon called for a commission of inquiry into the fire as well as a full inventory of what was destroyed, an examination of all aspects related to fire safety, and  a review existing systems, including building codes. Further, Mr. Harmon wants an immediate  assessment of all the response mechanisms, as well as a review of the available equipment  and the human resource capacity. “This investigative mechanism must provide a
comprehensive report. The findings must be made available for public scrutiny and immediate remedial action,” he said.

The Opposition Leader has also recommended a review the Fire Service Act with a view to arrive at recommendations for modifications at the Parliamentary level. Since Guyana is moving towards an environment of transformation, new, comprehensive and creative legislative action must be introduced in relation to fire
prevention and the safety of all Guyanese citizens, he said.-