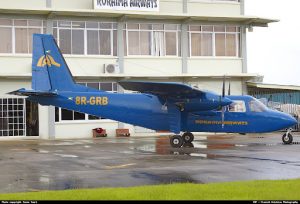 A Britten-Norman Islander plane was Wednesday afternoon  damaged in an incident on the Aricheng runway in Region Seven (Cuyuni-Mazaruni), officials said.

Director-General of the Guyana Civil Aviation Authority (GCAA), Retired Lt. Col, Egbert Field said the plane belonging to Roraima Airways was involved in a runway excursion during take off at about 4:15 PM.

He said no one was injured in the mishap involving the plane bearing registration markings 8R-GRB.

The plane, which was being piloted by Captain Ryan Prashad, was shuttling fuel among a number of interior mining locations, sources said.

Lt. Col. Field said investigators would be flying into the remote interior region on Thursday.

Roraima Airways’ Captain Gerry Gouveia could not be reached immediately for comment.

This is the third aircraft incident for the month of July, the first involving a Cessna Caravan owned by BK Aviation and the second was involving a single-engine plane owned by Domestic Airways. No one was injured in either of those incidents.