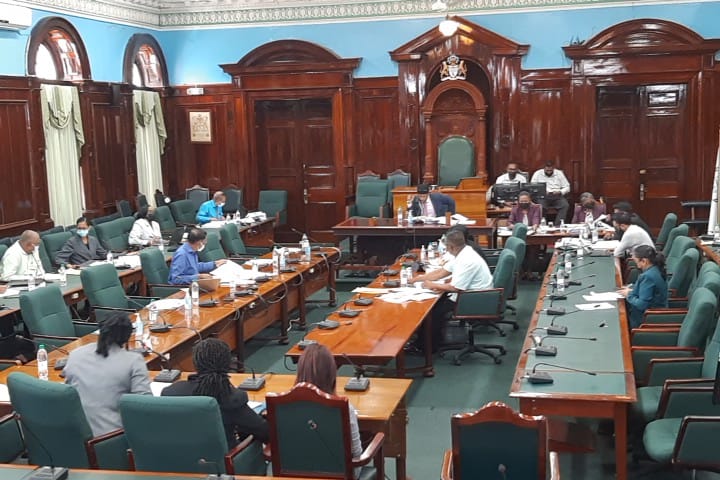 The Public Accounts Committee in session on July 15, 2021 under the chairmanship of Jermaine Figueira.

The Guyana government might have to write off just over GYD$19 million that had been spent on buying a closed circuit television system for the National Intelligence Centre in 2015 but which has never been delivered and the now bankrupt company cannot be located, officials said Wednesday.

“This was a matter that was entered into and the CCTV (Closed-Circuit Television system) never arrived,” Permanent Secretary of the Office of the President, Abena Moore told the bipartisan Public Accounts Committee (PAC). “According to the research we did, the company filed for bankruptcy,’ she said.

She said said that she had previously sought advice from the Attorney General’s Chambers and would do so again about the contract that was awarded on December 14, 2015 for GYD$19.108 million.

Ms. Moore said the name of the supplier of the CCTV system was Moon Blink Communications Inc. and its principals are  Shaun Birkett and Sean Nolan. Ms. Moore said efforts had also been made to ascertain whether there was an affiliate company.

Minister of Governance and Parliamentary Affairs, Gail Teixeira suggested to the PAC that perhaps the Finance Secretary of the Ministry of Finance and Cabinet should write off the transaction because no information was being found about the company. “Is it something that would have to be considered  by Cabinet as a write-off, in other words it’s a loss?,” she asked.

PAC Chairman, Jermaine Figueira said that all steps should be exhausted to get to the bottom of the transaction before government decides on whether to write it off. He suggested that Attorney General Anil Nandlall “can give the PS proper advice.”