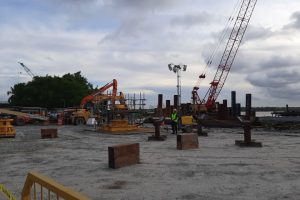 A section of the SAIPEM fabrication yard on Water Street, Georgetown on the eastern bank of the Demerara River.

President Irfaan Ali on Saturday threatened to change  the local content policy if foreign companies continue coming to Guyana to offer services such as logistics, transportation similar services as those would be reserved for Guyanese.

The President said government would be hiring its own local content and procurement auditors.

Using the provision of logistic services as an example, he said such an unscientific service should “easily go to Guyanese” instead of foreigners that would most likely purchased numerous properties and do the work themselves. He said an investor recently remarked that Guyana’s draft local content legislation “looks very tough”

Addressing the opening of SAIPEM’s onshore construction facility on Water Street, Georgetown, he acknowledged that Guyana did not yet possess highly specialised staff for the oil sector but eventually that would not be the case. “We would continue to acknowledge the fact that we don’t have the necessary technology at this point, the skillset at this point and the level of investment at this point but we must be clear on one thing. This point will always not be the point. It would have to change,” he said.

President of ExxonMobil Guyana, Alistair Routledge noted that, with SAIPEM’s operations here, it is a “good thing” that some of the competition has been brought from Trinidad and Tobago. He said to date more than 2,600 Guyanese and over 600 local suppliers are supporting the development of Guyana’s resources.

Mr. Routledge also used the opportunity to announce that from January to March, 2021 more than GYD$8.5 billion dollars have been spent with those suppliers.

SAIPEM currently employs 43 Guyanese including those working on the fabrication yard, logistics base and an offshore vessel. 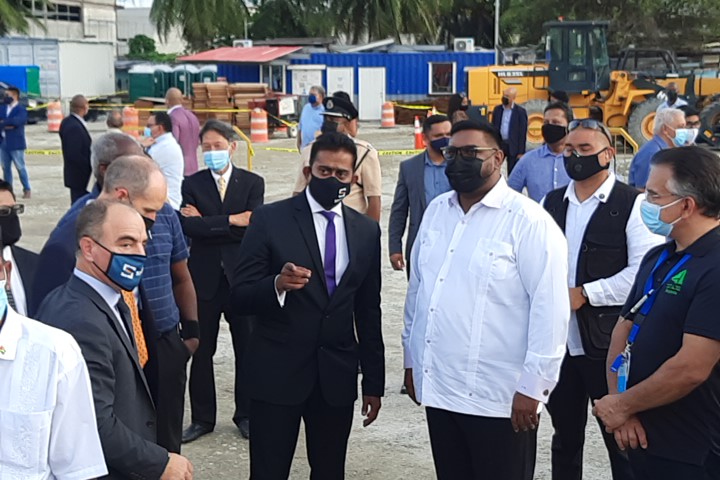 President and Chief Executive Officer of Saipem America, Giorgio Martelli said 15 Guyanese were currently offshore on the company’s “most sophisticated vessel.” “They are learning quickly,” he remarked. Mr. Martelli explained that the fabrication yard would be producing eight jumpers monthly in a limited size operation.  “It’s not an easy feat. We have many fabrication yards in the world….It’s a feat of organisation, of symmetry and planning,” he said.

President Ali praised SAIPEM for not only creating jobs but for the training that has been provided. “Fabrication is an important part of the future development of this industry,” he said. Apart from jobs, the President wants generational wealth to be created through about 1,000 entrepreneurs by using hydrocarbons as the springboard. “I am not only asking for that opportunity in oil and gas. I am saying to us as Guyanese that that opportunity can ony be created if we use the resources from this sector to open up other aspects of the economy and strengthen other aspects of the economy to give that opportunity,” he said. Dr. Ali cited opportunities in mining, agro-processing, rentals and owning local hotels.

He called on the private sector to come together and create synergies as part of efforts to give the government to lobby for them. “The local content is very clear. If Guyanese  have the capability and are competitive, they have to be given the business opportunity,” he said. In that regard, he urged foreign companies to work with Guyanese to improve their capacity to even go after opportunities in neighbouring Suriname where the oil and gas sector is rapidly emerging.

Mr. Bharrat also admitted that while government wants a local content policy and possibly legislation, Guyana needs to “build capacity” at the technical, managerial sections of the oil and gas sector as well businesses “so that we can compete regionally and internationally” to provide goods and services at the same standard but at competitive prices.