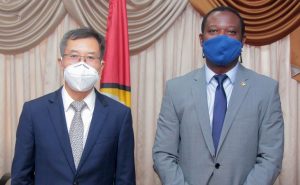 Minister of Foreign Affairs and International Cooperation, Hugh Todd on February 4, 2021 met with Chargé d’Affaires of the Embassy of the People’s Republic of China, Mr. Chen Xilai, during which they discussed areas of mutual interest and cooperation.

President Irfaan Ali has reaffirmed the “excellent” relations between Guyana and China just over one month after this South American nation’s diplomatic blunder to approve the establishment of a Taiwan investment office here.

“President Ali said that the gesture further emphasized the excellent relations between Guyana and China,” he said in referring to China’s donation of 20,000 vaccines last week.

The statement was issued by the Ministry of Foreign Affairs.

Within 24 hours of the announcement by the United States embassy here and subsequent confirmation by Guyana’s Ministry of Foreign Affairs, the Guyana government back-pedaled its decision after a protest by China.

Vice President Bharrat Jagdeo is on record as saying that the green-lighting of the Taiwan office in Guyana should never have happened and Cabinet had never discussed it.

President Ali reportedly told China’s President Xi Jinping that “the gesture was an expression of China’s commitment to assist the countries of the world to combat the global pandemic and for vaccines to be seen as a public good.”

China considers Taiwan a renegade province, but the United States is a strong supporter of Taiwan.

Experts on the Guyana-Venezuela border controversy have, however, reasoned that Guyana could not afford to abandon China which is a permanent member of the United Nations Security Council. Conceivably, if Venezuela takes military action action against Guyana over that Spanish-speaking neighbour’s claim to the Essequibo Region, the experts the issue could reach the Security Council.

2021-03-07
Denis Chabrol
Previous: Equipment, other items stolen from churches in Linden
Next: Joint Services, teachers next in line for vaccination- Prime Minister