Joint Services, teachers next in line for vaccination- Prime Minister 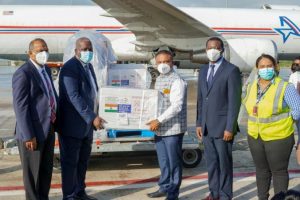 Prime Minister, Mark Phillips  on Sunday said members of the Joint Services and teachers are next in line to be vaccinated against COVID-19 to ensure they do not die from the viral disease, moments after India’s donation of 80,000 vaccines arrived in Guyana.

“We want to vaccinate our Joint Services and teachers but we will acquire more vaccines and we’ll reach out to every Guyanese to take the vaccines,” he said.

The Prime Minister reiterated that Guyanese should not be fearful of taking the vaccine, but should rather embrace it to reduce their chances of fatality if they contract the virus.

“For every Guyanese let me put it simply, if you have the vaccine it means you can be guarded against dying from COVID-19… while we thank the Government of India for providing the vaccine, it is an opportunity for me to appeal to the Guyanese people to come forward and take the vaccine,” he was quoted as saying at the Cheddi Jagan International Airport where the chartered cargo plane touched down with the jabs.

Education Minister Priya Manickchand is already on record as saying that the month of March would be used to gauge the effectiveness of the vaccination programme before deciding whether all schools will be reopened for face-to-face classes.

The Oxford-AstraZeneca-invented vaccine is branded COVISHIELD and is manufactured in India.

The vaccines arrived at the Cheddi Jagan International Airport (CJIA) Sunday  morning and were immediately handed over to the Prime Minister by High Commissioner of India to Guyana, Dr K.J Srinivasa. Minister of Health, Dr Frank Anthony and Minister of Foreign Affairs and International Cooperation Hugh Todd were also at the airport.

Government has already begun rolling out the vaccines to frontline health workers, with the next priority categories being members of the Joint Services and the elderly with existing health problems.

Minister of Health, Dr Frank Anthony said that the government has also been looking at other avenues to procure additional vaccines to ensure that the country reaches herd immunity before the end of 2021.

Herd immunity happens when the vast majority of people are immune to the disease, which eventually stops its spread. “We have been looking at other avenues to procure more vaccines, we have about 100,000 now and that will help us to immunise approximately 50,000 people, this is not going to be enough if we want to reach herd immunity by the end of the year…. We have been in discussion with the Government of India to see how we can get some additional vaccines… and we have also been talking to a number of other partners to see whether or not we’ll be able to procure additional vaccines,” Dr Anthony said.

India is a vaccine powerhouse. It makes approximately 60% of the world’s vaccines and is home to half a dozen major manufacturers.

The Prime Minister said that the vaccines would assist Guyana greatly in phase two of the fight against COVID-19.

“The vaccination will help us in a substantial way as we continue the recently started phase two of dealing with COVID-19.  You are aware that in phase one we were able to put measures in place and fortify our health systems to deal with not only the spread, but the tracing and treatment of people who would have contracted the disease… phase two is the vaccination”.

The vaccination process in Guyana commenced on February 11, with the distribution of the AstraZeneca (ChAdOx1 nCoV-19) vaccine, to healthcare workers at the Georgetown Public Hospital Corporation, after Guyana received 3,000 doses as a donation from Barbados.

The Indian High Commissioner said that the donation of the 80,000 vaccines to Guyana demonstrates India’s commitment as a first responder during times of crisis and marks another milestone in bilateral relations between the two countries.

He emphasised that the vaccines were donated in the spirit of friendship and that the Indian Government expects nothing in return for the friendly gesture.

“The foundation of these donations across the world lies in India’s belief of Vasudhaiva Kutumbakam, meaning the world is one family.  We all have to work together to take care of each other and that is the philosophy behind these donations …. I want to stress that India donates these vaccines demanding nothing in return, we do not ask for any quid-pro-quos, India is doing it in a spirit of collaboration, in a spirit of friendship and in a spirit of helping our friends who require these vaccines across the world”.

The vaccines form part of a 570,000-vaccine donation from India to CARICOM nations.

Some 255,000 doses, inclusive of today’s donation, have already been donated across the region.