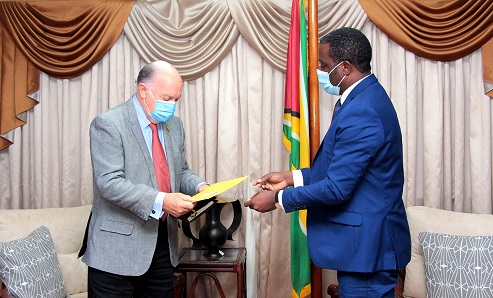 The Foreign Affairs Ministry said Mr. Todd also expressed “Guyana’s condemnation of the recent violation of Guyana’s sovereignty” on Tuesday at about 1:20 PM when the two Sukhoi SU 30 fighter jets “flew over the community of Eteringbang and the airstrip at a very low altitude.”

“The fighter jets then circled the location once before proceeding in an easterly direction,” the Foreign Ministry said. It was not clear how far east the planes flew into Guyana’s airspace. A senior Guyanese police officer said the planes passed over the police station and the Guyana Defence Force location.

“The Minister voiced the Government’s concerns on the act of aggression and stated that such an action was a clear violation of Guyana’s territorial space as well as International law and convention,” the Foreign Ministry said.

The incursion of Guyana’s airspace by the Venezuelan fighter jets came just days after Venezuela’s Defence Minister Vladimir Padrino said that it would “defend at all levels” its rights over the Essequibo Region.

About two months ago, Venezuela’s navy intercepted two Guyanese fishing vessels in waters off the Essequibo Region and took them to Venezuela where they had been detained for about two weeks.

Venezuela eventually buckled to wide-ranging international and Caribbean pressure and released the boats and crew safely into Guyanese waters.

The escalation of military action against Venezuela has followed Guyana’s filing of a case at the International Court of Justice asking that for a declaration that the 1899 Arbitral Tribunal Award that settled the land boundary between the two nations is final and valid.

Venezuela continues to maintain that the ICJ does not have jurisdiction and that instead the two countries should resume bilateral negotiations under the auspices of the United Nations, a process that Guyana has said has not worked for 50 years.