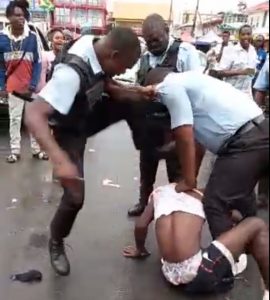 One of the policemen seen stamping the suspect repeatedly.

Two Guyanese police were captured on video assaulting a robbery suspect at the Stabroek Market area, an incident that has sparked outrage in some quarters and prompted the Guyana Police Force to order an internal probe while at the same time saying that the lawmen were forced to “defend themselves.”

In the extended video seen by News-Talk Radio Guyana 103.1 FM/ Demerara Waves Online News, one of the policemen is seen stamping the suspect in his face while he was scuffling with another policeman.

At the start of the available video, the suspect is seen first assaulting one of the policemen by hitting him on his left hand while the police held on to his vest  as he sat in a police patrol vehicle. The incident soon escalated into fast-paced scuffle that ended up with the policeman and the suspect outside of the vehicle on the roadway.

The Guyana Police Force claimed that the suspect attacked the policemen “who were forced to defend themselves.” “This led to a physical confrontation between the suspect and the police, part of which has been circulating on social media,” police said.

Policemen said the man, who was robbed at about 4:35 PM Sunday, January 3, 2020, has since identified the suspect as the person who robbed him, with aggravation, of a Samsung smartphone and GYD$25,000.

“The suspect is in police custody and has refused medical attention, while the injured police ranks were treated at the GPHC (Georgetown Public Hospital Corporation),” police said.

The Police Office of Professional Responsibility  said it is investigating the matter.

The Police Force is asking anyone who may have witnessed the incident, between the suspect and the members of the Force, to make contact with the Officer in charge of the Police OPR on Telephone number 227-1926 or the Commander of the Regional Police Division on 226-1389.