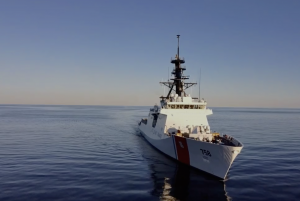 The United States Coast Guard has deployed a brand new patrol vessel, USCGC Stone (WMSL 758), for a multi-month operation in the Atlantic waters of Guyana and several other South American nations to counter illegal fishing, boost their authority over their maritime space and heighten security.

“The U.S. Coast Guard is committed to the protection of living marine resources. IUU fishing threatens the health of fish stocks and adversely impacts those who follow global norms and national laws. This is a global issue, and IUU is a problem too big for any one nation. Only by working together can we protect livelihoods, ensure ports remain economically productive, and support and sustainable fisheries industry. Stone’s patrol demonstrates our commitment to the established rules-based order while addressing IUU fishing wherever a Coast Guard cutter is deployed,” Vice Admiral Steven Poulin, commander of U.S. Coast Guard Atlantic Area, was quoted by USCG as saying.

Earlier this year, Guyana and the US activated their more than 20-year old Shiprider Agreement that provides for American air and sea patrols in Guyanese waters and airspace to fight drugs trafficking.

Other partner nations expected to benefit from  this mission are Brazil, Uruguay, Argentina, and Portugal. The cutter also embarked an observer from the Portuguese navy for the operation’s duration, the C0ast Guard added.

Operation Southern Cross is conducted in conjunction with U.S. Southern Command, charged with managing operations in Central and South America by working collaboratively to ensure the Western Hemisphere is secure, free, and prosperous.

The Coast Guard said USCGC Stone (WMSL 758),  departed from Pascagoula, Mississippi, Tuesday, just ahead of Christmas as part of a mission aimed at  “countering illegal, unregulated, and unreported fishing while strengthening relationships for maritime sovereignty and security throughout the region.”

The brand new Legend-class national security cutter, one of the U.S. Coast Guard’s flagships, will provide a presence and support national security objectives throughout the Atlantic. This patrol is the cutter’s initial shakedown cruise following its delivery in November.

Latest available analyses show that nearly half the world’s population relies on fish for 20 percent of their animal protein. IUU fishing removes access to this valuable protein source, particularly to the most vulnerable coastal States.

The first sale value of global fish production in 2018 stands at $401 billion. IUU Fishing results in tens of billions of dollars of lost revenue to legal fishers every year.

Of the world’s top marine fish stocks, 93 percent classified as fully exploited, overexploited or significantly depleted. IUU fishing undermines the sustainable management of these resources, pushing them to the limits of their capacity.

The ship’s namesake is U.S. Coast Guard Cmdr. Elmer “Archie” Fowler Stone.  On April 10, 1917, he became the Coast Guard’s first aviator upon graduating from flight training at Pensacola, Florida. In 1919, Stone was one of two pilots to successfully make a transatlantic flight in a U.S. Navy seaplane, NC-4, which landed in Portugal. NSCs are 418 feet (127 meters) long with a 54-foot beam and displace 4,500 tons with a full load. They have a top speed of 28 knots, a range of 12,000 miles, an endurance of 60 days, and a crew of around 120.