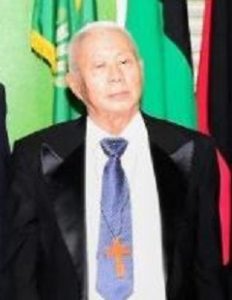 Anglican priest George Chuck-a-Sang has been beaten and stabbed to death at his residence on Vlissengen Road, Lodge, Georgetown, police said Tuesday.

His daughter, Renata Chuck-a-Sang, reportedly told police that after she failed to reach her 82-year-old father again by phone and WhatsApp, she and current Priest Monsell Alves later went to his residence and discovered his body. “As a result she along with the said Priest went to her father’s home where Alves opened his office door, where her father was living and they went up an inner stairway to the upper flat of the house, where they discovered the body of her father lying motionless on the floor clad in a white brief,” police said.

Ms. Chuck-a-Sang said she last spoke with her father at about 8 am on December 18 but failed to reach him via WhatsApp at about 3 pm on December 21 and his phone rang out.

An autopsy would be conducted to officially determine the cause of death.

He had been appointed a member of a Lands Rights Commission of Inquiry in 2017 by then President David Granger.

Previous: Guyana poised to expand COVID-19 task force to prepare for arrival of vaccines
Next: Three Guyanese for US Young Leaders of the Americas Initiative Fellowship