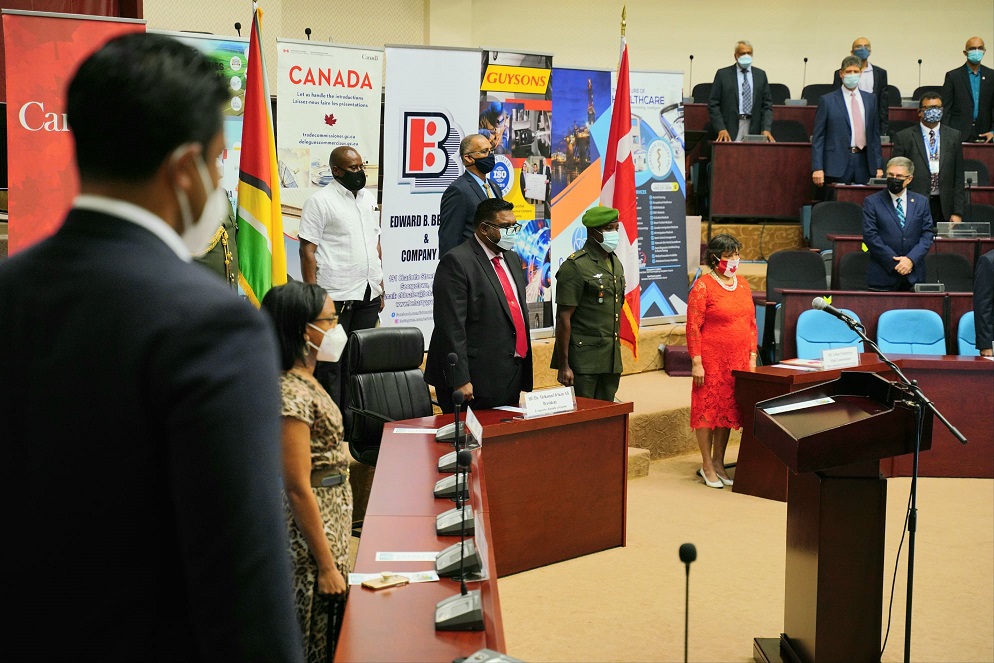 President Irfaan Ali, Canada’s High Commissioner to Guyana Lilian Chatterjee and others at the launch of the Guyana Canada Chamber of Commerce.

Canada believes that sister-Caribbean Community (CARICOM) member-states and the Americas will have to be Guyana’s major and immediate source of skilled persons to fill the much-needed gap to help forge ahead with its expected oil-driven growth.

Outgoing Canadian High Commissioner to Guyana, Lilian Chatterjee said Guyana evidently does not have a large population or required skilled persons to take advantage of the wealth expected to pour in from the petroleum sector.  Noting that Canada has also had to depend on migrants for its economic development, she said her country would not flood Guyana with Canadians but would be willing to continue playing its part in this country’s development.

“Many oil-producing countries in the Middle East understood that. So you should accept that others – and I suspect they will be mostly your geographic neighbours from CARICOM and the Americas…to support your growth at the outset until Guyana can supply the skilled workforce it needs. Even today, Canada welcomes immigrants to provide the skilled workforce we need to fuel our growth. Don’t resist foreign investment but use your judgement on who you can trust”,  said Chatterjee.

Guyana has over the years been attracting interest in its oil and gas sector from the United States, Canada, Mexico, Argentina, and Brazil.

The Canadian envoy, whose mandate includes searching for business opportunities for her country, assured Guyana that Canada was not now reaching out to Guyana opportunistically because of the huge oil reserves.  “We will not flood you with an influx of Canadian employees. We will provide Canadian expertise but in order to have true partnership, Canadians will rely on training a skilled workforce in Guyana. But let me be clear: that workforce does not exist right now in Guyana. You do not have the population yet to be the engine of your rapid growth,” Ms. Chatterjee said.

She was at the time addressing the formal launch of the  Guyana Canada Chamber of Commerce.

Government has already decided to offer 20,000 scholarships to Guyanese to study online at the University of Guyana, University of the  West Indies and other institutions.

President Ali said his administration was ready to engage the Guyanese Diaspora, but at the same time they must be ready to take advantage of  opportunities rather than find reasons why some things cannot work. “The Diaspora also has to be ready and willing to engage and to come back. Yes! There will be risks. I’m not standing here to tell you everything is smooth and beautiful. Of course there will be risks. Where there is no risk. There will be challenges but don’t say you want to be part of the development and list a thousand challenges why you want to be there, then you’ll never be there,” said the President.

Officially, Canada estimates that the Guyanese Diaspora is about 200,000 persons.

On the business and trade side, however, President Irfaan Ali said his administration would be going after CARICOM nations that are erecting barriers to Guyana’s exports. Providing greater details about his plan to  take on those sister member states of the Single Market and Economy (CSME), he said the government would be arming itself with trade barrier information to join the private sector in confronting those countries that are imposing trade barriers. “I have asked the Foreign Ministry today to bring a list of all the hurdles we have in every single market we have in CARICOM and we are going to put together a joint team of the private sector and the government to break down those hurdles, to get all products in,” he said.

In the past, Guyana has experienced severe problems exporting its ice cream, fruits, vegetables and honey to a number of CARCOM member states.