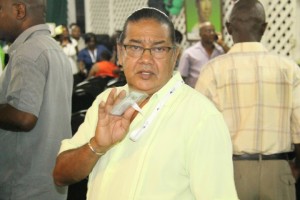 Lawrence “Larry” Singh holding up his PNC-Reform delegate card as he objected to his photograph being taken at that political party’s 2016 Biennial Delegates Congress. (File pic)

Licensed arms and ammunition, Larry Singh, has been sued by the Guyana government for failing to supply more than GYD$369 million in firearms and ammunition to the Guyana Defence Force between 2014 and 2016, according to court papers filed by Attorney General Anil Nandlall.

The National Procurement and Tender Administration (NPTAB) had granted approval for the GDF to sole source the supplies and three contracts had been awarded to Mr. Singh, but the State is claiming that he did not supply. “The respondent has failed and/ or refused to supply the number of weapons and ammunition for which he has received payment and he is indebted to the Guyana Defence Force in the manner more particularly set out in the Statement of Claim,” the Attorney General says.

The Attorney General said repeated efforts to secure a refund have been futile.

Mr. Nandlall says Mr. Singh had contractually undertaken to be solely responsible for the shipment of the weapons from countries of origin to Guyana, and to ensure the correct weapons are delivered within 150 days after the Bill of Laden is provided.

Mr.  Singh, who attended a People’s National Congress Reform (PNCR) Congress, had been awarded a controversial contract by the Ministry of Health for the storage of pharmaceuticals at a house on Sussex Street, Albouystown, Georgetown that had been converted into a pharmaceutical bond. Back in 2016, the government had budgeted GYD$250 million to rent the Sussex Street bond. The then opposition People’s Progressive Party had noted that the house had been purchased for GYD$25 million and was being rented to government for GYD$12.5 million per month