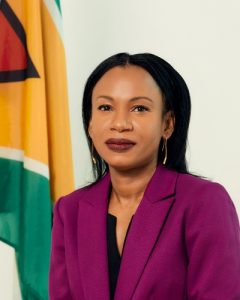 The opposition A Partnership for National Unity+Alliance For Change (APNU+AFC) on Wednesday asked the High Court to order the removal of Minister of Tourism Oneidge Walrond as a parliamentarian because she had taken the oath while she had still been an American citizen.

Filing the court action was Opposition Chief Whip Christopher Jones who contended that, based on documents Ms. Walrond had submitted to Clerk of the National Assembly Sherlock Isaacs, she had still been a United States (US) citizen on September 1 when she had taken the oath as a Parliamentarian.

“To date Oneidge Walrond,   the Third Named  Respondent, continues to be a member of the National Assembly and a member of the Minister of the Government of Guyana in breach of the Constitution of Guyana.

That  as  a  member  of the National Assembly, it is right and proper that I insist and demand that there be full and complete compliance with the Constitution,” said Mr. Jones in an affidavit.

Also being used as evidence in the case is a statement by Ms. Walrond who had said that she had renounced her citizenship on August 18 with immediate effect and that she took the oath as a Parliamentarian on September 1 “after I renounced my citizenship of the United States of America.”

Vice President Bharrat Jagdeo has virtually ruled out Ms. Walrond being sworn in a second time as a minister and parliamentarian.