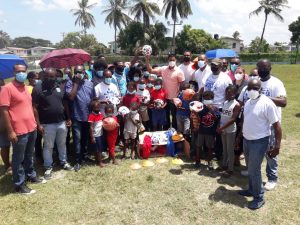 Sport Minister Charles Ramson (centre) pose with recipients of sport gear at Agricola, East Bank Demerara. Other members of his delegation and community are also in picture.

Minister of Culture, Youth and Sport Charles Ramson shrugged off suggestions that traditional opposition strongholds were being targeted in the delivery of sport gear as a means of making political inroads.

“A government will never look at the position of government and treat it as though it is a temporary situation. However, your actions are the ones that indicate whether you remain in government or not,” said Mr. Ramson in the People’s National Congress Reform (PNCR)-led coalition stronghold of Agricola, Greater Georgetown in response to a question on whether there would be long-term political benefit.

Mr. Ramson said when it comes to “ploys” the kids who are the beneficiaries of the sport gear would not be interested in politics. He said the long-term benefits would be  improving skills, being healthy and possibly becoming career sportsmen and women.

He acknowledged that activities such as those were part of government’s plans to “stay connected” with Guyanese regardless of their political loyalties.  “An important point of this is that coming into government, what we had said is that we would be a government for all people regardless of whether the area had supported the PPP, whether the people had supported the PPP, our position in government, our action would be a government for all people so you won’t find us going into areas that are exclusively supportive to the PPP,” he said.

Minister of Culture, Charles Ramson pops in at the Agricola Anglican Church that is currently under rehabilitation. A senior member of the church briefs him about works.

Ramson led a team of officials from his ministry  on walk-through and meet-and-greet in Agricola before presenting youths on the community playground with footwear, basketballs, footballs and other items. He said that community was earmarked because community leaders had told him that the previous government had not acceded to a request for sport gears and “they said ‘no’.”

He also visited an Anglican Church being rehabilitated and heard of financial constraints in completing the work as well as poor drainage around the place of worship.

Among those accompanying the Sport Minister on his tour were well-known Guyanese football promoters – Kashif and Shanghai- and top officers of the Guyana Police Force including Assistant Police Commissioners Clifton Hicken, Simon Mc Bean as well as Community Development Committee (CDC) representatives.

This visit comes sharply on the heels of a similar visit to West End (Tiger Bay), a depressed community  on the edge of the heart of commercial Georgetown.