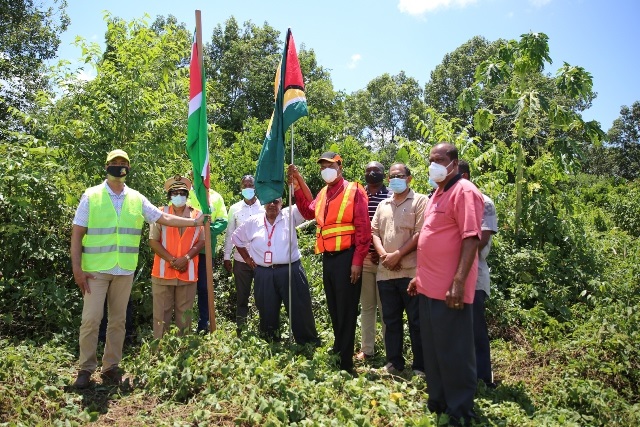 Minister of Public Works, Hon. Bishop Juan Edghill along with the Surinamese and Guyanese delegation trekking through the bushes to plant the flags at the location for the bridge on the Guyana border.

Guyana and Suriname will next month sign an agreement to build a bridge across the Corentyne River.

Officials say the signing will take place when President Irfaan Ali visits Suriname for that country’s Independence Anniversary on November 25.

“Planting the flags here means that we are here for a sustainable project, which is very important for movement and development of both countries. With this we are giving a very important sign, not only to the Government, but to the future persons who will be involved in preparing the signing, constructing the bridge and maintaining the bridge. We want a very sustainable bridge, which the community can profit from,” Dr Nurmohamed was quoted as saying in a government Information Department release.

Guyana’s Chief Transport Planning Officer, Mr Patrick Thompson says consultations are still ongoing for the final design of the bridge. He explained that there will be a flat high-span bridge, to allow for maritime traffic, leading from Guyana to Long Island where a road will be built to connect to the Surinamese side.

Suriname’s President, Chandrikapersad Santokhi has said in a recent visit to Nickerie, which borders Guyana, that the bridge would be built with funding from a public-private partnership involving both countries.