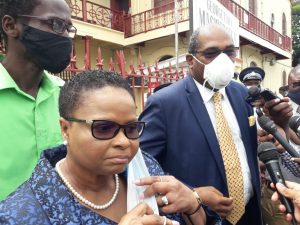 Chairman of the People’s National Congress Reform (PNCR) Volda Lawrence has been asked to report to the Criminal Investigation Department next Monday at 10am, the opposition coalition said Saturday.

Initially, she was asked to do so Saturday afternoon, but an A Partnership for National Unity+Alliance For Change (APNU+AFC) spokesman said the date has been changed.

The coalition slammed the governing People’s Progressive Party (PPP) for using the police force to unleash psychological warfare against the opposition.

“Today there has been an unmistakable further intensification of the psychological terrorism on the leadership of the APNU+AFC Coalition by the PPP regime and their complicit agents in the Guyana Police Force,” the coalition said.

The opposition coalition has condemned the move saying its physiological terrorism on the leadership of the APNU+AFC coalition leadership by the PPP regime using the Guyana Police Force.

Ms Lawrence is currently before the court facing an election-related charge along with Region Four Returning Officer Clairmont Mingo.

She is currently on bail.

The requirement of Ms Lawrence at CID follows that of the Deputy Chief Election Officer of the Guyana Election Commission (GECOM) Roxanne Myers who had presented herself and had been detained for 72 hours before she was Friday charged with two counts of misconduct in public office and granted $300,000 bail.

APNU+AFC restated that the series of charges against GECOM officials and coalition supporters is aimed at derailing the two election petitions. The Chief Election Office Keith Lowenfield, Region Four Returning Officer Clairmont Mingo, Personal Assistant to the Chief Elections Officer and other GECOM staffers were all in a string of arrests by the police in an ongoing investigation of electoral fraud following the March 2 elections.

“This latest devious and abominable action by the PPP regime further crystallises that they are horrified and frightened by the APNU+AFC Coalition’s elections petitions which they know they will lose and will result in their removal from government which they temporarily occupy. They are attempting every desperate tactic to thwart the hearing of the election petition,” APNU+AFC said.