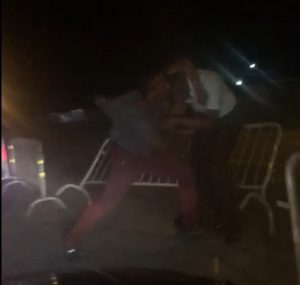 Scuffle between a man and a policeman at the western end of the Demerara Harbour Bridge.

A Guyana Defence Force Coast Guardsman has been arrested for allegedly assaulting a policeman on duty at the western end of the Demerara Harbour Bridge, police said.

Police say the incident occurred at about 8 o’clock Friday night when Constable Wilson, who was on anti-crime patrol, approached a car that was trying to change lanes and so caused traffic congestion.

He says he approached the driver, told him of the offence and instructed him to pull to the corner of the road.

He says he warned the driver about his behavior and asked him to desist but instead he continued to further assault him by cuffing him to his face and other parts of his body. 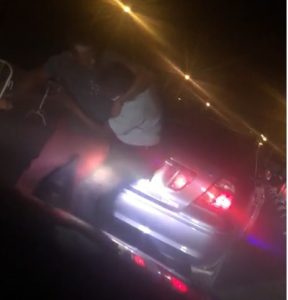 The Guyana Police Force says Constable Wilson and other policemen managed to arrest the driver after which he was escorted to the La Grange Police Station and placed in custody pending investigations.

Constable Wilson was treated at a hospital and sent away.