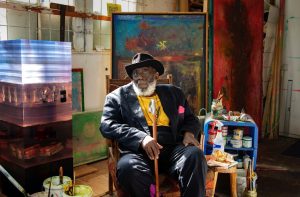 Artist Frank Bowling OBE RA has been conferred with the honour of Knight Bachelor in the Birthday 2020 Honours List by Her Majesty The Queen.

The Birthday Honours list recognises the achievements of a wide range of extraordinary people across the United Kingdom.

During his six-decades long career, Bowling’s relentless pursuit of excellence in painting underpins a lifetime of service to British art. At age 86, he still is an active painter with an irrepressible work ethic, working in his studio almost every day.

“I’ve set out on a quest to explore the possibilities of paint, and I find myself making something new every time. I have an insatiable determination to experiment with colour, form and process, to create new and original artworks that push the boundaries of the medium, while being intellectually grounded in post-war abstraction. The things that paint can achieve are so vast and diverse that I don’t think I’ll ever be done with it. Trained in the English art school tradition, my identity as a British artist has always been crucial to me and I have viewed London as my home since arriving in 1953 from what was then British Guiana. To be recognised for my contribution to British painting and art history with a knighthood makes me extremely proud. Friends and family have played a role in my studio since the 1960s – as a husband, father, grandfather and recently a great-grandfather, I am honoured to sit at the centre of a modern family to whom I feel much gratitude.”

“Often described by critics as a late modern master, in many ways, recognition has come late in our father’s career. We are delighted he is getting this distinction now for his contribution to the canon of contemporary and modern art. He has shown dedication and dogged persistence in the face of obstacles throughout his life of painting, including having to deal with stereotypical associations made between his work and origins. It requires exceptional dedication to follow one’s own unique vision for decades, for much of the time with little reward. The whole family is overjoyed at this news. We couldn’t be prouder of all that our father has achieved.”

Frank Bowling is one of the leading British painters alive today. Over the past sixty years, his large-scale abstract canvases have explored the nature and possibilities of paint and pursued forms of expression, which are both nuanced and open-ended. In May 2019, a major retrospective of his work, subtitled “The Possibilities of Paint Are Never-Ending”, opened at Tate Britain to outstanding critical acclaim.

Born in Bartica, British Guiana, Mr Bowling moved to England in 1953. After doing his National Service in the Royal Air Force, Mr Bowling went on to study art, winning a scholarship to London’s Royal College of Art in 1959. His early paintings embedded layers of autobiography in abstraction, incorporating silkscreen images of his home and family members back in Guyana. It was not until moving to New York in 1966 that he made a decisive turn towards abstraction. The move soon won him two Guggenheim fellowships (1967, 1973), and a solo exhibition at the Whitney Museum of American Art, New York in 1971.

With an increasing focus on material, process, and colour, Mr Bowling developed a very personal palette for his large, light-filled, lyrical colour abstractions. It is during this period that Mr Bowling’s seminal ‘Map Paintings’ – a series of colour fields overlaid with stencilled maps of Australia, South America and Africa – was produced. Known also for his writings on art, particularly in debates around Formalism and ‘Black Art’, he has always vigorously rejected being defined by restrictive labels that sought to pigeonhole him, and in 2005 he became the first Black artist to be elected a Royal Academician.