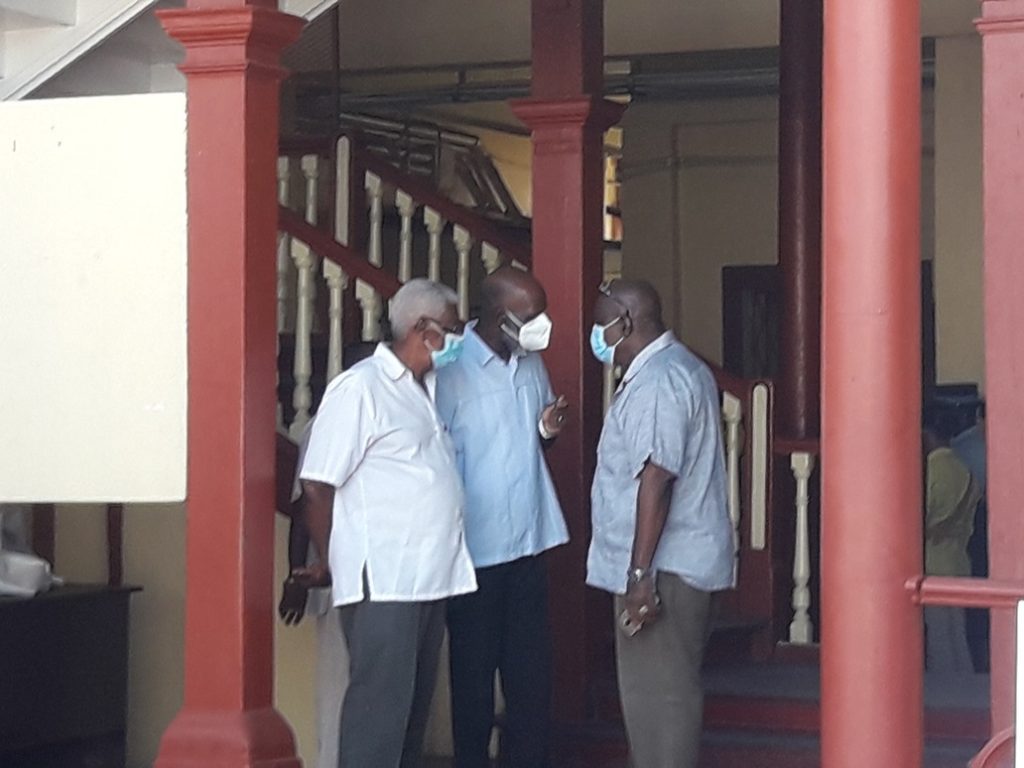 Amid accusations by pro-opposition A Partnership for National Unity+Alliance For Change (APNU+AFC) election commissioners that the Chairman of the Guyana Elections Commission (GECOM) Retired Justice Claudette Singh is facilitating a police probe into officials of that election management agency, Singh on Friday upbraided them for their baseless claims and vowed to protect the staff.

“As Chairperson of GECOM and a former Police Legal Advisor, I do not have the authority to interfere into the work of the Guyana Police Force nor any other Statutory Body and will always ensure that the best interest of the members of staff of GECOM are protected,” she said in a statement issued shortly after Elections Commissioner, Desmond Trotman implicated her in conspiring with police to target several GECOM officers.

As Ms. Myers’ bail was being processed, Mr Trotman and colleague Commissioner Vincent Alexander stood outside the Georgetown Magistrates’ Court and launched a blistering attack on the GECOM Chairman. The duo said the GECOM Chairman admitted that documents had been handed over to police.

“Party to what is happening, is the Chair of the Commission because she is facilitating every line of action that the police is taking and claiming that she cannot interfere…She has instructed that documents be handed over without ascertaining what the documents are going to be used for,” said Mr Trotman who is also an executive member of the Working People’s Alliance (WPA), once a member of the APNU umbrella.

But the GECOM Chairman said initially the Criminal Investigations Department of the Guyana Police Force had requested the employment contracts for several persons. She recalled that after the request had been discussed at a statutory meeting of GECOM, she had sought clarification from police who had indicated that they had wanted job descriptions.

Justice Singh said the job descriptions were provided to police because that is public information in contrast to the contracts that are confidential to the commission and the employees. “After some discussion, I undertook to seek clarity from the CID as to the purpose of the request as these documents are private to GECOM and those members of staff. A response from the CID advised that what in fact was required were their respective Job Descriptions. Considering that this information is public, I instructed the Human Resources Manager to provide Job Descriptions only,” she said.

The GECOM Chairman scolded Mr Trotman for attacking the commission although he had been part of the deliberations. “It is regrettable that Commissioner Trotman will publicly admonish work of the Commission especially in light of the fact that he was present and a party to these discussions,” she said.

Mr Alexander said the GECOM Chairman did not tell the commission whose job descriptions were handed over to the police and she appeared disturbed by questions that are aimed at eliciting details. “In a sense, when we ask these questions the Chairman is mostly annoyed that we are asking for this information. Her expression shows disgust- why are we asking?,” said Mr Alexander, a former People’s National Congress Reform (PNCR) executive member, the major APNU partner.

Joseph Harmon, who is APNU General Secretary and Opposition Leader, also echoed similar concerns about apparent collusion between the GECOM Chairman and police investigators. “It is no wonder that the Chairman of the Elections Commission has not raised her voice in concern for the welfare of these officers who work under her. The only conclusion one can arrive at is that the Chairman is complicit with respect to the dismantling of the GECOM by the PPP,” he said.

The Opposition Leader noted that none of the officials, who were responsible for now missing polls books, has been questioned by police, an indication of a campaign of bullyism to break up the commission and an assault on democracy.