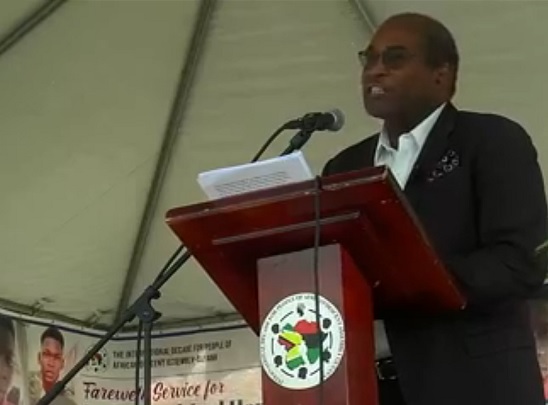 Hours before the mutilated bodies of the two slain teenagers were began the long journey from Georgetown to West Coast Berbice for burial, fresh calls were issued for Guyana’s race relations problem to put on the national agenda of political leaders and other stakeholders.

The discovery of the bodies of the two Afro-Guyanese on a coconut estate in the backlands of Cotton Tree Village, West Coast Berbice last week Sunday had sparked off four days of violent unrest on the public road of the Upper East Coast Demerara and  West Coast Berbice. There mainly Indo-Guyanese had been robbed, assaulted and badly beaten. It is not yet clear whether the killing of 17-year old Haresh Singh aback Number Three Village was a revenge for the Henry cousins.

Mr. Hughes said at the heart of the issue is that Guyanese are living “contradicted realities” of very fragile race and ethnic relations daily and especially during elections. He recommended that efforts be made to reverse the horribly deformed society of Guyana and instead strive to achieve the objective of the national motto ‘One People, One Nation, One Destiny’ built on the cornerstones of equality, equal rights and justice. “The time has come for our leaders to acknowledge that race and ethnicity are national problems and consequently place them on the national agenda. The time has come for our leaders to meet, sit and collectively address this national scourge,” said Hughes, a former Chairman of the Alliance For Change (AFC) with which he maintains some relations. 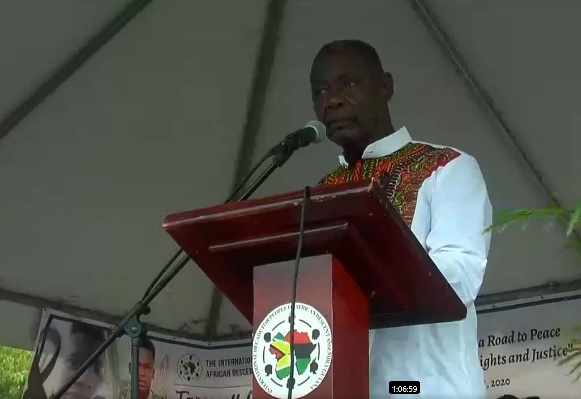 President Irfaan Ali and Opposition Leader Joseph Harmon are yet to hold talks about a new governance model following the August 2, 2020 declaration of the People’s Progressive Party (PPP) as the winner of the March 2, 2020 general and regional elections.

Mr. Hughes recommended that political leaders visit each other’s communities to understand problems of alienation and distrust as well as find creative ways to “teach our people that the celebration of your ethnicity and your ethnic identity does not mean the denigration of another ethnicity or racial identity.” Another recommendation, he floated, is the formation of ant-racial alliances towards peace, mutual respect, equality, equal rights and justice.

IDPADA-G Chairman Alexander urged that Guyanese talk freely about the state of their relations with the aim of removing centuries-old inherent conflicts and different socio-economic conditions. “It behoves us to come to term with our reality and to commit to reengineering the society least we continue down the road of degeneration and failure as humans and individuals. Our clarion call in the face of the snuffing out of two valuable lives has got to be the call for a national conversation on the state of our nation and a commitment to reengineering our society; nothing else at this time could be of more importance,” he said.  Mr. Alexander stopped short calling directly on the government or opposition to start those talks, saying “those at the helm of the ship must answer this call or be held culpable for the sorry state and implosion of Guyana.” 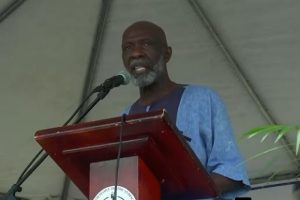 Though the GTUC General Secretary did not offer any specific solutions, he singled out the need for social, economic and political justice to forge peace and eliminate deprivation, marginalisation, dehumanisation, victimisation and killings.

Pastor Ellsworth Williams, in his tribute, noted that the theme of the farewell service was “Forging a Road to Peace Through Equal Rights and Justice”,  and he hoped that the death of the Henrys would lead to peace, reconciliation and human rights despite hiccups along the way. Mr. Williams also called for Guyana’s political leaders to find solutions. “The death of these guys …their death will not go in vain but as a result of these deaths, we are going to be more inclusionary. We are going to see political, spiritual and other leadership rising up in this realm, rising up above the spirit of racism, rising up above the day and we will keep, brothers and sisters, embracing and declaring peace over this land and as a result of equal rights, not two kinds of rights, not two kinds of people but equal right,” he said. 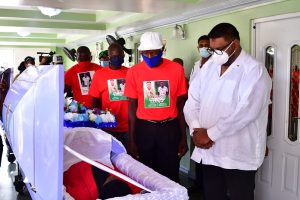 President Ali (white shirt jac) and family members of Isaiah and Joel Henry viewing one of the bodies.

Speaking at the funeral  home at a separate event, President Irfaan Ali also highlighted the need for the deaths of the Henrys to be rewarded by long-term peace and unity. “What we can pray for ultimately is for justice for these two young men, for peace and unity and to let their lives be a legacy for the future of Guyana,” he stated. “These events must never occur again… in the memory of these two young men, all of Guyana should recommit to love, peace unity and to serve in God.”

No one has been charged and police have been virtually tight-lipped about the status of their investigations.

In the wake of concerns that the Guyana Police Force would be unable to conduct a proper investigation, the Guyana government has announced that it would ask the United Kingdom and the Caribbean Regional Security System to assist with the investigations.

Seven persons had been arrested and subsequently released on station bail.

2020-09-13
Denis Chabrol
Previous: Harmon, Lawrence at one on justice for Henry cousins but seemingly differ on approach
Next: US Secretary of State’s advance party arrives in Guyana