US Secretary of State’s advance party arrives in Guyana 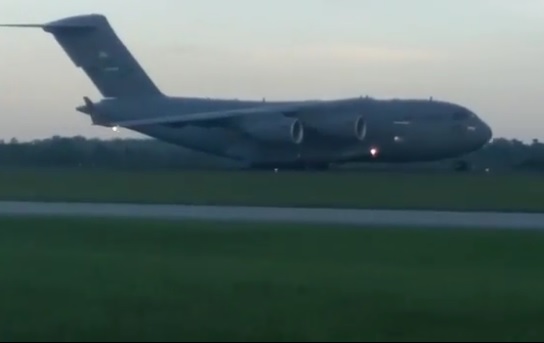 A United States (US) military transport aircraft arrived Sunday in preparation for Secretary of State, Michael Pompeo’s visit to Guyana later this week, according to well-placed sources.

The C-17 US Air Force military transport plane landed at the Cheddi Jagan International Airport (CJIA) at about 5:30 PM bringing with it an advance party of more than two dozen people as part of an advance party for Mr. Pompeo’s visit.

A number of those persons are expected to  participate in preparatory, logistical and security discussions beginning Monday.  The Chief-of-Staff of the Guyana Defence Force, Brigadier Godfrey Bess has been invited by the Foreign Affairs Ministry to participate in that meeting.

Permanent Secretary of the Ministry of Foreign Affairs, Ambassador Audrey Jardine-Waddell has already confirmed that the US Secretary of State would be visiting Guyana from September 17 – 18, 2020.

The Guyana government has not provided any details about the agenda of the Mr. Pompeo’s visit, but the Guyana Human Rights Association has called on the Irfaan Ali-led administration to state what would be the non-negotiables concerning Venezuela in the context of that country’s decades-long claim to the Essequibo Region.

The US Secretary of State had over the past five months issued repeated calls for the then David Granger-led administration to concede defeat at the March 2, 2020 general elections and for the results to be compiled based on the national vote recount numbers.

Mr. Granger had earlier this year objected to the use of  Guyana’s frequency spectrum for the beaming of Voice of America radio programmes to Venezuela. The US badly wants the removal of the socialist dictator, Nicolas Maduro from power but the  GHRA has cautioned that the US’ preferred successor is hostile towards Guyana on the territorial claim of the Essequibo Region and all of the oil-rich Atlantic sea.

American oil major, ExxonMobil, began commercial oil production from one  of the 18 wells discovered so far offshore Guyana. Estimates are that the Guyana basin so far has proven reserves of more than 8 billion barrels of oil equivalent.