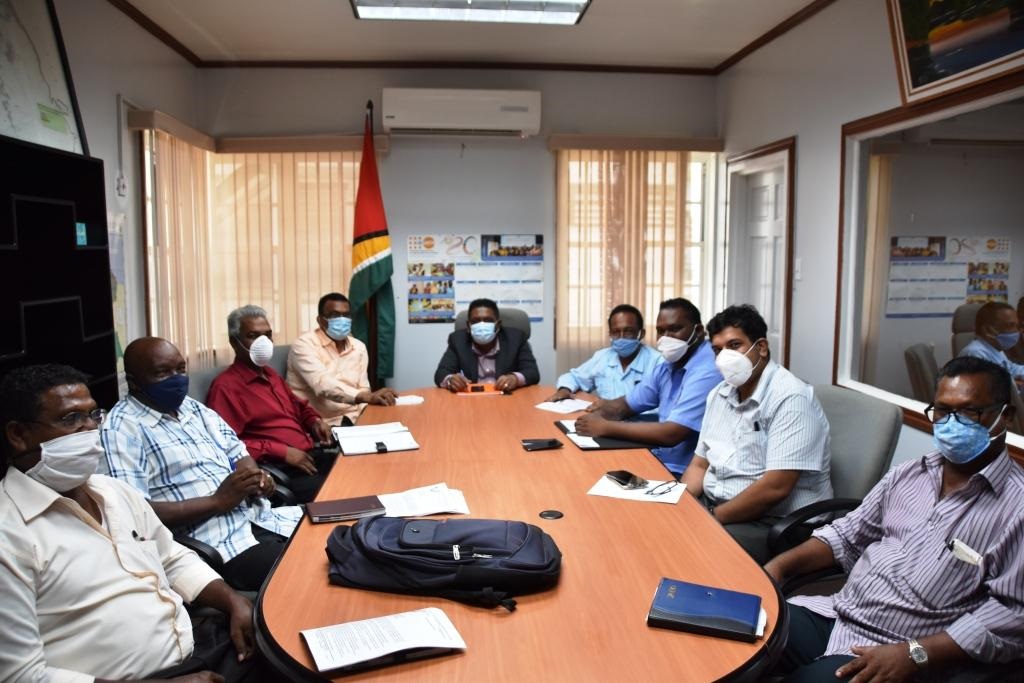 Agriculture Minister, Zulfikar Mustapha during his meeting with GAWU and NAACIE officials

As sugar production plummets to an all-time low this year, Guyana is turning to India to assist with reopening the sugar estates that were closed about four ago by A Partnership for National Unity+Alliance For Change (APNU+AFC)-led administration.

“As a matter of fact, I recently submitted the Terms of Reference and they (the Indian Government) will be sending two specialists to assist with the reorganisation of the industry. This is the first step. I’ve also discussed acquiring the equipment necessary to assemble factories at estates that were closed,” Agriculture Minister Zulficar Mustapha was quoted as saying in  a statement following a meeting with the two sugar unions.

The Minister said as a result of his meeting with the Indian High Commissioner, two technical officers from India would be coming to Guyana to assist government with the diversification process.

APNU+AFC had closed Skeldon, Albion, Rose Hall-Canje, Enmore-Ogle and Wales Estates and sent home more than 5,000 workers, citing unprofitability and a drain on the national treasury.

The General Secretary of the Guyana Agricultural and General Workers’ Union (GAWU), Mr. Seepaul Narine recommended to government in a meeting with the minister that the new factories that India would likely provide should be part of plans to get into value-added of a variety of products. “The factories do not have to be as big as the ones that were closed. In fact, the project can be more about making an entire complex, where Government can set up a distillery and explore the production other feasible things from the sugarcane like of animal feed, organic compost, etc. You can also look at the packaging, branding and marketing of molasses. There is a favourable market for it, especially in Europe, since people are cooking with cane-sugar molasses rather than cassreep. These are all ways in which the industry can diversify and become profitable,” Mr. Narine was quoted as saying.

The Guyana Manufacturing and Services Association (GMSA) has publicly called on government to reopen the sugar estates to supply molasses, a major ingredient in pharmaceutical, rum and confectionery production.

Clearly under pressure to keep its campaign promise to reopen the shuttered estates, the incumbent People’s Progressive Party (PPP) has been reassuring its supporters that it will do so. The Agriculture Minister said a task force was assessing the state of the closed estates.  “We recognize the economic and social benefits of having the estates open and we will be putting all of our efforts forward to ensure everyone who benefited from those estates will soon be able to enjoy those benefits once more,” Mr. Mustapha said. The Agriculture Minister said many of the factories were left as empty shells..

Mr. Narine, a PPP parliamentarian,  reportedly further advised that government should explore areas like cogeneration and the use of the bagasse and other bi-products of sugar cane that are usually discarded in the production of sugar.

As it relates to issues of management in GuySuCo, the Agriculture Minister assured the officials that the ‘top-heavy’ attitude and improper dissemination of information to workers would soon be a thing of the past.

Minister Mustapha also took the opportunity to congratulate Mr. Narine on his recent appointment as a Member of Parliament.

GAWU said said the Guyana Sugar Corporation Inc (GuySuCo) would not be able to realize this year’s revised and lowered sugar production target.

While the sugar corporation has set itself  a revised second crop target of 69,480 tonnes sugar, GAWU notes that only 9,519 tonnes sugar of which 1,326 tonnes were produced in this current week have been produced so far in week five.