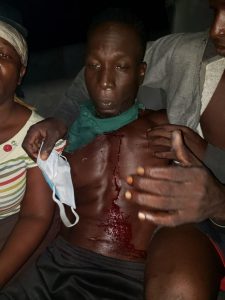 A civilian and a policeman were early Monday morning injured when police fired rubber bullets and teargas to disperse protesters who blocked the Belladrum Public Road  all day Sunday and overnight, police said.

Region Five Divisional Commander, Edmond Cooper said the injured were taken to hospital. However, he said the protests in solidarity with Region Four Returning Officer, Clairmont Mingo has spread to at least three other villages including Calcutta, Mahaicony.

“The traffic flowing past me (Belladrum/Paradise) but by Mahaicony is still blocked up,” he told News-Talk Radio Guyana 103.1 FM/ Demerara Waves Online News.

Belladrum residents on Sunday beat drums on the roadway, lit wood and other debris across the road as well as placed an old wooden shop across the lone east-west thoroughfare. They are demanding that Mr. Mingo, who was arrested last week Tuesday, be released from police custody.

He remains in custody and is expected to appear in court this morning on four charges of misconduct in public office in relation to the March 2, 2020 general and regional elections.

The Guyana Police Force Sunday night warned that it will use all lawful means to clear the public roadway at Belladrum of the illegal protests. The law enforcement agency says the rights and freedoms of Guyanese who need to use the public road to move freely must be protected. Police also say the protesters are violating the COVID-19 measures that prohibit the gathering of so many persons.

GECOM official Sheffern February has been slapped with two counts of conspiracy to commit fraud.

Also due to appear in court today is Information Technology Officer at the Elections Commission, Enrique Livan.

He was yesterday charged with fraud after a confrontation in the presence of police with former People’s Progressive Party (PPP) elections commissioner,  Mr. Robeson Benn.

He says since Mr. Livan was arrested last Thursday night, he has been denied access to a lawyer. Mr. Anderson says no  one has contacted him.

The lawyer says Mr. Livan was told that his cellular phone, which has since been unlocked, will be returned after it is processed.

The lawyer says throughout Mr. Livan’s arrest and during the multiple interviews done Mr. Livan has asked the police to reduce their questions into writing such that he can take advice before considering offering an answer in the form of a statement.

Mr. Livan had been implicated in the movement of a laptop and flash drive after a tabulation of votes had been suspended at the Region Four Returning Office, Ashmin’s Building at Hadfield and High Streets, Georgetown.