APNU+AFC election petition to be filed on Monday 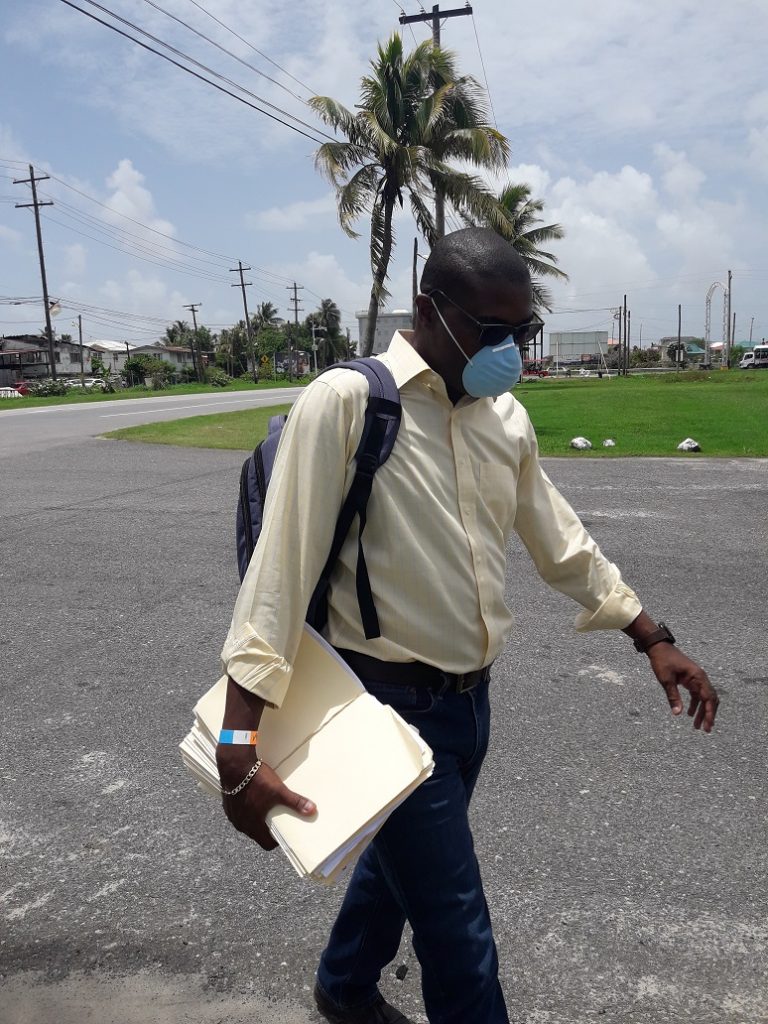 APNU+AFC election official David Patterson on May 5, 2020 outside the Arthur Chung Conference Centre where votes were being recounted with a files of related documents.

With just a few more days left before the deadline, the A Partnership for National Unity/ Alliance for Change (APNU+AFC) coalition has announced plans to file an election petition in the High Court on Monday, according to incoming Opposition Leader Mr. Joseph Harmon.

This information was revealed via social media on Thursday in a post appearing on Mr. Harmon’s official Facebook page.

It said, “Message from DG Joseph Harmon, Good afternoon Comrades the petition will be filed on Monday 31st August, 10 a.m., Supreme Court Building. We are asked to mobilize in numbers to lend support to our party. We want a big manifestation against this persecution that is going on.”

Attorneys Mr. Roysdale Ford and Mr. Mayo Robertson both confirmed with told News Talk Radio 103.1 FM/ Demerara Waves that the petition has been finalised and is indeed ready to be filed. Mr. Ford said the party will be moving to file it very soon, while Mr. Robertson said it will be filed within the legal timeframe. Asked to provide finer details regarding the applicants and arguments, Mr Robertson declined to comment only saying, “I am not prepared to disclose any information at this time.”

“I maintain that the report ordered by the Court and presented to the Commission (GECOM) contains significant anomalies and irregularities…The APNU+AFC coalition cannot endorse a flawed report and will continue its campaign to ensure that the votes of all Guyanese are accurately recorded, tallied and reported,” he stated.

During a live radio interview earlier this month, Mr. Granger had said that party lawyers were working on the petition and supporters could expect that the petition will be filed very soon. “The lawyers are meeting every day to hammer out the details of it,” he explained.

However, the time taken to move to the High Court, is in stark contrast with other legal challenges that were filed to block the national election recount. And according to Guyana’s election laws, the party has 28 days to file an election petition, which therefore means it has until month-end to do so.

The former President had said he expects the matter to be dealt with by the courts promptly, the same manner with which they dealt with the legal matters that were filed over the past five months when the country was embroiled in a major electoral impasse.

“I expect once the petition is filed, it should be heard expeditiously and dealt with as appropriate…We are working towards ensuring that the petition is filed on time and that it’s comprehensive in that it presents the complete scale of anomalies and abuses that we have been able to compile,” the PNCR leader added.

A national vote recount, which was agreed to by Mr. Granger and the then Opposition Leader Mr. Bharrat Jagdeo and CARICOM-certified, showed that the People’s Progressive Party/Civic (PPPC) secured 233,336 votes, while the APNU/AFC coalition secured 217,920 votes, a difference of some 15,416 votes. The three ‘joinder’ parties- A New and United Guyana (ANUG), Liberty and Justice Party (LJP) and The New Movement (TNM) got a total of 5,214‬ votes.

The governing PPP has already hinted at establishing a Commission of Inquiry (COI) into the 2020 elections problems. Chief Elections Officer Mr. Keith Lowenfield is facing three private charges for alleged fraud and misconduct in handling the results of the March 2 elections. Region Four Returning Officer Mr. Clairmont Mingo and his assistants are also being questioned by police in relation to alleged electoral fraud.