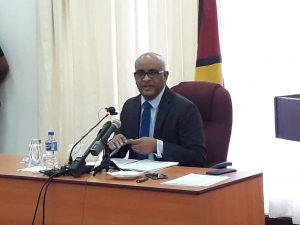 Vice President Bharrat Jagdeo on  Friday said the owner of Ocean View International Hotel, which has been converted into an Infectious Disease Hospital, is unlikely to regain possession of his building in the immediate future.

“I must say that he’ll have a long wait,”  said Mr. Jagdeo in reference to the owner of the seaside building at Liliendaal, Greater Georgetown.

Addressing his first news conference as Vice President, Mr Jagdeo said his now two-week old People’s Progressive Party (PPP)-led administration has unearthed “a lot of irregularities” which would have to be investigated.

The owner of the former hotel, Jacob Rambarran, at the change of government, issued a demand for GYD$65 million in rent for the past five months in keeping with a lease Mr. Rambarran has said the gazetted  order for compulsory acquisition has no force. He asked the government to vacate the building if it would not pay the rent of GYD$13 million per month.

The Vice President, however, said government would not be vacating the premises because GYD$1.6 billion of public monies were used on the building. He said health officials were cautious about seriously ill  COVID-19 patients being housed there because the building had fungus.

Mr. Jagdeo questioned how Mr. Rambarran was unaware that there was no actual lease agreement.

Attorney General Anil Nandlall has also acknowledged that the gazetted order only marked the start of the process.

Mr. Jagdeo bemoaned the spending of GYD$1.6 billion on remodeling and rehabilitating the Ocean View International Hotel because it is private property.

Then President David Granger had officially commissioned the health facility one week before he was declared the loser of the March 2, 2020 elections.