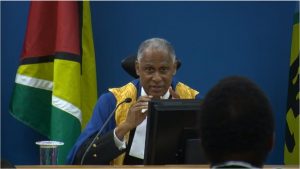 Two judges of the Caribbean Court of Justice (CCJ) on Wednesday morning raised questions about whether Guyana’s constitution and election law can be amended by subsidiary legislation.

CCJ President , Justice Adrian Saunders posed the question to Attorney-at-Law John Jeremie, for the respondent Eslyn David. “Does that sound right to you?,” Saunders said. 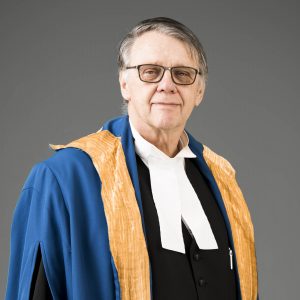 Justice Saunders also remarked that if the CCJ were to rule that a court can determine the validity of the election of an official before the official is actually elected, that would be the first time that the Commonwealth that would happen.

CCJ Judge, Jacob Wit queried what was meant by valid votes, and he went on to remark that that would have implications for the Representation of the People Act which speaks about valid votes. “If you give a different meaning to valid votes, that would not be within the jurisdiction of the Court of Appeal and will be dangerous to do it this way,” the judge said.

The recount Order 60 provided for the reconciliation of votes cast in the March 2, 2020 general and regional elections with voters’ lists, counterfoils and stubs.

Attorney-at-Law , Douglas Mendes, for appellants Bharrat Jagdeo and Irfaan Ali remarked that “it will amend the constitution.”